The Elephant's Journey by José Saramago

José Saramago, the Portuguese author, won the Nobel Prize for Literature in 1998. He died last year. I have read about a half-dozen of Saramago’s works, and each time I start another of his novels, it takes a bit of getting use to his style.

The Elephant’s Journey is exactly that. Saramago based his novel on an historical event that occurred in the 16th century. King João III of Portugal has decided to present his cousin, Archduke Maximilian of Vienna, an elephant, Solomon, as a wedding present. The mahout, Subhro, who cares for the beast in a broken down corner of the king’s zoo, guides the elephant and a troop of workers and soldiers, on a trek across Europe during the Reformation and amid various conflicts.

Saramago’s prose contains long, convoluted sentences that sometimes repeat facts, or predict future events, or even fill in background information. They remind me of the “digressions” found in Beowulf, the great epic of the Anglo-Saxons written near the end of the 10th century c.e. Furthermore, he embeds dialogue in his sentences with little to no punctuation. Only a capital letter alerts the reader another person is speaking.

Here is an example:

“If I [Subhro] get to Vienna, I won’t be coming back. Won’t you go home to india, asked the commanding officer, No, I’m not an Indian anymore, And yet you obviously know a lot about hinduism, More or less, sir, more or less. Why do you say that, Because it’s all words and only words, and beyond the words there’s nothing, Is ganesh a word, asked the commanding officer, Yes, a word. like all the others, can only be explained by more words, but since the words we use to explain things, successfully or not, will in turn, have to be explained, our conversation will lead nowhere, the mistaken and the true will alternate, like some kind of curse, and we’ll never know what’s right and what’s wrong” (52). 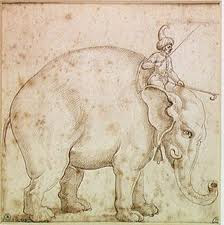 He also sprinkles gems of wisdom throughout his story. Here is a favorite of mine:

“The past is an immense are of stony ground that many people would like to drive across as if it were a road, while others move patiently from stone to stone, lifting each one because they need to know what lies beneath” (21). Sounds like an allegory of politicians and pundits who like to ignore the inconvenient aspects of history for their own purposes.

Saramago also has his moments of dry humor. The caravan halts near a village for rest, and some of the town’s people come out to see what’s what. They misunderstand some of the conversations about hinduism, and they rush to the local priest to tell him “God is an elephant” (57). The priest decides this is a demon from hell, and he orders the entire village to follow him to the caravan :

“The priest dipped the aspergillum in the water, took three steps forward and sprinkled the elephant’s head with it, at the same time murmuring words that sounded like latin, although no one understood them, not even the tiny educated minority present, namely the commanding officer, who had spent some years in a seminary, the result of a mystical crisis that eventually cured itself” (62-63). 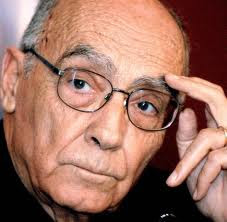 Saramago’s novels really are great fun to read. The Stone Raft has the Iberian Peninsula breaking off from Europe and floating out into the Atlantic. In All the Names, a clerk becomes obsessed with the life of a woman he accidentally discovers when he removes a seventh card from an index file, instead of his customary six. Blindness is Saramago’s reworking of Camus’ The Plague.

Reading Saramago requires a bit of effort, but the rewards are … elephantine!

This nifty, slim volume holds about 220 haikus from all the great masters of the genre. Basho, Issa, Onitsura, Saikaku, to Yasui along with many others, present a showcase of wonderful nuggets of timeless beauty and simplicity. I stumbled on it at Plotz Used Books in Waco.

Haiku Harvest, the fourth in a series, started at Peter Pauper Press. Their website says they have been producing fine books since 1928. This volume, like the others, has translations by Peter Beilenson and Harry Behn. Each page has woodblock-style Japanese prints. Most of the poems are really good in translation, but a few – very few – have an awkward word or violate the 5-7-5 rule. Here follows a couple of my favorites.

Snow whispering down
all day long, earth has vanished
leaving only sky --Joso

Oh that summer moon!
It made me go wandering
round the pond all night --Basho

A hunt for the first three volumes in this series has already begun.