The Goldfinch by Donna Tartt

771 pages: a large book by any standard.  Unfortunately, because of teaching and other duties, I rarely have time to spend a couple of weeks on a behemoth of a novel.  But several friends were so insistent I read Donna Tartt’s The Goldfinch, I decided during a break in grading to clear all other priorities and tackle this novel.  I started on a Thursday and finished on Sunday.

This might sound silly, but I actually enjoyed holding the book and feeling the silky smooth paper.  Then I got to the novel, and I was completely blown away.  This is my first experience with Donna Tartt, but I can guarantee it will not be my last.

Donna Tartt was born and raised in Mississippi, but she left the south for Bennington College in Vermont in 1982.  She was raised in a family of voracious readers.  She told one interviewer her mother read novels while driving.  While at Bennington, she began writing her first novel, The Secret History, which became a bestseller.  Her second novel, The Little Friend, won the prestigious W.H. Smith Award in 2002.  Tartt is a slow writer – each of novels take about 10 years from conception to publication.  The Goldfinch is her third novel.  The detail in this compelling novel attests to the level of work that took ten years She writes by hand on paper and note cards.

Theo Dexter lives in Manhattan with his, mother Audrey, a part-time model, actress, and artist.  Theo’s father, an alcoholic with a gambling addiction abandoned the family about a year before the story begins.  One day, Theo and his mother decide to stop into a museum to view some notable old masters on display.  Theo spots an attractive young girl with red hair accompanied by an elderly man.  He loses interest in the exhibit and begins to follow the young girl, when he is knocked to the ground by an explosion.  Unhurt, Theo begins moving toward the exit now blocked.  He encounters an elderly man, who has been mortally injured.  He gives Theo a ring and asks him to take it to a certain address.  The dying man also tells Theo to take a small painting which has fallen off the wall.  This is The Goldfinch of the title.  He does not see the young girl.  He takes the ring to the address, and meets the elderly man’s business partner, Hobie.  Together they ran an antique store.  He learns that Pippa, the red headed girl, is recovering from her injuries at the home of Hobie and the elderly man, Mr. Blackwell.  Meanwhile, Theo wraps the painting securely and hides it in his room.  All this action occurs in about the first 50 pages.

However, I had absolutely no desire to abandon Theo, Pippa, and Hobie.  Every page of this novel contains interesting characters, situations, descriptions, interior monologues of the highest order.  I could not stop reading.  The list of characters far exceeds the few I have mentioned here. 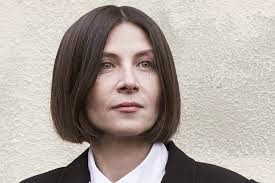 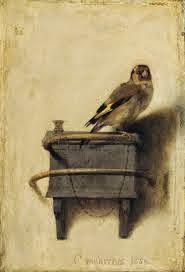 Janet Burroway, in her creative writing textbook, Writing Fiction, says, “every story must have a complication, crises , and resolution.”  Tartt has filled this novel with a series of complications, which create one crisis after another for Theo, which he manages to resolve, through pluck, intelligence, and hard work.

Donna Tartt’s The Goldfinch moves to the top of my list for the year, and perhaps the decade.  I have rarely encountered a novel of such grace, beauty, heartbreak, sadness, joy, and with thrills, mysteries, and even some chilling moments sprinkled on almost every page.  This novel has it all, and I could not urge my listeners more strongly to read this book as soon as possible.  You will get to know Theo; you will become a part of his family; you will be forever affected by Tartt’s power as a storyteller.  I have to raise my scale to 10 stars for this extraordinary novel, which I have just learned, won the 2014 Pulitzer Prize for Fiction.

Toni Morrison has written ten novels, and while Sula, the story of two friends raised together, who take wildly different paths toward womanhood, remains my favorite, reading a Toni Morrison novel is always an interesting and thoroughly entertaining experience.  She has received the National Book Critics Circle Award, a Pulitzer Prize, and in 1993, she was awarded the Nobel Prize in Literature.  Home is her tenth novel.

Frank Money has returned from the Korean War physically and psychologically damaged.  To make matters worse, he returns to an America in the depths of the Jim Crow era, with lynching and cross burnings.  The murder of Emmett Till, and the bold stand by Rosa Parks were still in the future.  He returns to his home, but finds it oddly strange – he barely recognizes once familiar people and places.  He finds his younger sister suffering from medical abuse, and tries to rescue her.  In order to do that, he must return to the Georgia town he hated all his life.

Morrison describes Frank’s train ride home from Portland, Oregon.  She writes, “Passing through freezing, poorly washed scenery, Frank tried to redecorate it, mind painting giant slashes of purple and X’s of gold on hills, dripping yellow and green on barren wheat fields.  Hours of trying and failing to recolor the western landscape agitated him, but by the time he stepped off the train he was calm enough.  The station noise was so abrasive, though, that he reached for a sidearm.  None was there of course, so he leaned against a steel support until the panic died down” (27). 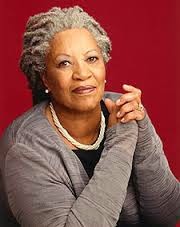 Clearly, Frank suffered from what we now recognize as PTSD.  However in 1952, Frank was unlikely to get help from the government, and he certainly was not likely to find any help or support in the community at large.  Frank goes on a shopping trip for some new clothes with Billy.  The buy Frank a suit at Goodwill, then head to a shoe store for work boots.  When they come out of the store, they walk into some police activity.  Morrison writes, “…during the random search outside the shoe store they just patted pockets, not the inside of work boots.  Of the two other men facing the wall, one had his switchblade confiscated, the other a dollar bill.  All four lay their hands on the hood of the patrol car parked at the curb.  The younger officer noticed Frank’s medal.  // ‘Korea?’ // ‘Yes, sir.’ //  ‘Hey, Dick.  They’re vets.’ // ‘Yeah?’ // ‘Yeah. Look.’  The officer pointed to Frank’s service medal.  // ‘Go on.  Get lost, pal.’ //  The police incident was not worth comment so Frank and Billy walked off in silence” (37).  Sounds a lot like the recently discontinued New York City policy of “stop and frisk.”

Will Frank rediscover the courage he had in Korea?  If you have not read Morrison in a while, Home, at a mere 145 pages will reintroduce the reader to this thoughtful, powerful writer.  If you have not read anything by one of America’s great literary treasures – tsk, tsk – Home is a great place to start.  5 stars

The Snow Leopard by Peter Matthiessen

Peter Matthiessen ranks high on the favorite list of not only non-fiction readers, but writers as well.  My first encounter with Peter came in the form of a book I choose for the title: The Snow Leopard.  I have always loved the big cats, and snow leopards were early on my favorite.  Sadly, Matthiessen died on April 5, 2014.  In a strange coincidence, I heard an interview with Peter on the radio on Friday, April 5.  The host, Terry Gross of Fresh Air, mentioned he was suffering from Leukemia, and they aired an interview from a few years ago.

The publication of Peter Matthiessen's final novel In Paradise came only days after his death at the age of 86.  Matthiessen was a naturalist, as well as writer, a spy, and a Buddhist monk.  His fiction and nonfiction books were often inspired by his travels to remote corners of the globe. In addition to Snow Leopard, he wrote Men's Lives, and Far Tortuga, and The Tree Where Man was Born, an interesting study of the Masai tribes of East Africa.  Peter, along with George Plimpton and Harold L. Humes, founded the noted literary magazine, The Paris Review.  Zen Buddhism provided the central tenets of his life and greatly influenced his writing. 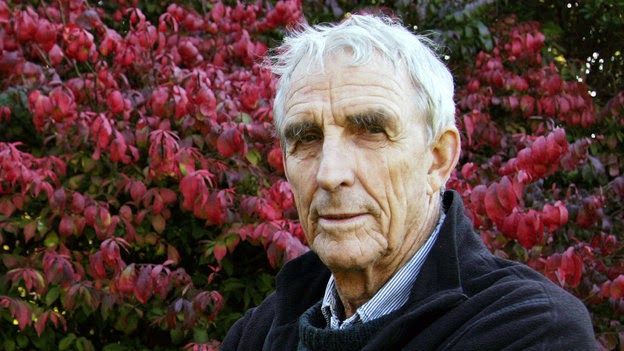 The Snow Leopard, which recalls Mattheissen’s 1973 trek to the Himalayas to see the elusive cat, opened a whole new world of nature writing and provided the seed for my interest in the philosophy of Buddhism. His prose is as gentle and relaxing as a Buddhist monk softly murmuring his prayers.  A good example is in the Prologue to Snow Leopard, he writes, “In late September of 1973, I set out with [the zoologist George Schaller] on a journey to the Crystal Mountain, walking west under Annapurna and north along the Kali Gandaki River, then west and north again, around the Dhaulagiri peaks and across the Kanjiroba, two hundred fifty miles or more to the land of the Dolpo, on the Tibetan Plateau.”  … I knew [George] first in 1969, in the Serengeti Plain of East Africa … When I saw him next, … in 1972,  he had started a survey of wild sheep and goats and their near relatives the goat-antelopes.  He wondered if I might like to join him the following year on an expedition to northwest Nepal, near the frontier of Tibet, to study the bharal, or Himalayan blue sheep,” which were plentiful and protected by the Crystal Monastery. … where bharal were numerous, there was bound to appear that rarest and most beautiful of the great cats, the snow leopard” (3).


This introduction filled me with wonder and curiosity.  Before the days of computers, I created a list of animals, and names of places, mountains and rivers.  I spent an afternoon in the local library pouring over books, to try and capture a glimpse of what Peter saw on this “mythic journey.” 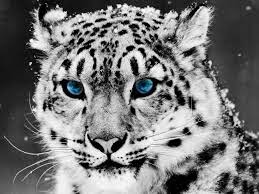 Along with his vivid descriptions, he genously sprinkles philosophical musings.  In true Buddhist form, the journey has far more importance that the destination.  He wrote about his “own idea of freedom, the possibility and prospect of ‘free life,’ traveling light, without clining to or despising, in calm acceptance of everything that comes, free because without defenses, free not in an adolescent way, with no restraints, but in the sense if the Tibetan Buddhist’s ‘crazy wisdom,’ of Camus’s ‘leap into the absurd’ that occurs within a life of limitations” (112).


Over the years, I have heard many a writer praise the non-fiction of Peter Matthiessen.  Many of them aspire to writing something which approaches his powers of description.  Ironically, Mattheissen preferred writing fiction, and only, -- as he said in an interview on Fresh Air—wrote non-fiction to pay the bills.”  For lovers of animals, nature, adventure, and philosophical musings, The Snow Leopard, by Peter Matthiessen will provide many enjoyable hours in a comfortable chair.  5 stars