I have sorely neglected one of my favorite writers.  I last wrote about Ian McEwan in 2010, when I reviewed his then latest novel Solar.  McEwan has come out with a new novel entitled Sweet Tooth.  Back then I wrote with glee about a new story by this Booker Prize-winning author.  Here I am again with his latest work.

Sweet Tooth relates the story of Serena Frome “rhymes with plume,” (1) who devours 2-3 books a week, but she admits she rarely can recall details from what she reads.  She begins reading more closely and taking notes.  When it is time for University, her mother pushes her into maths.  Serena would rather study English.  She barely escapes the torture with a third – probably akin to a C average.  She simply cannot get her mind around calculus.  While a student, she begins an affair with an older man, who abandons her, then starts another with a professor at her college.  Professor Tony Canning has some connections with MI5, the branch of British Intelligence devoted to international affairs.  He helps her secure an entry level position in this mysterious and secretive agency.

This novel takes place in the early 70s, and women hired by many British Government agencies held only positions as file clerks.  However, Serena’s voracious reading habits land her a quick promotion as assistant desk officer.  McEwan tells the reader the first women director of MI5, was still filing documents when Serena arrived.

I am going to come right out and say it:  I love Ian McEwan’s writing, his stories, and his characters.  Sweet Tooth has become one of my favorite reads this year.  Serena’s love of books and reading captivated me from the beginning.  She muses, “Writers are said to have superstitions and little rituals.  Readers have them too.  Mine was to hold my bookmark curled between my fingers and stroke it with my thumb as I read.  Late at night, when the time came to put my book away, my ritual was to touch the bookmark to my lips, and set it between the pages before closing the book and putting it on the floor by my chair, where I could reach for it easily next time” (63).  A woman after my own heart. 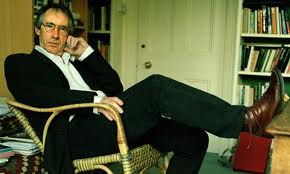 Another thing which makes me relish McEwan’s work is his vocabulary.  Every time I read one of his novels, I learn half a dozen or so new words.  My favorite occurs early on in the story.  McEwan writes, “The United Kingdom had succumbed, one letter announced, to a frenzy of akasia—which was, Tony reminded me, the Greek word of acting against one’s better judgment.  (Had I not read Plato’s Protagoras?)  A useful word.  I stored it away” (22).  Stored it away indeed!  I love Serena’s character.

Ian McEwan’s Sweet Tooth makes me want to devise a new rating system.  Some books are simply better than … 5 stars.