The Golden Droplet by Michel Tournier

One of the side effects of being a voracious reader involves hunting down earlier works by authors we love and admire. It took some effort to find this 1988 novel, but it proved to be a worthwhile endeavor. 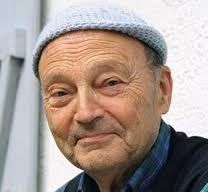 Michel Tournier was born in Paris, and he studied philosophy at the Sorbonne and at the University of Tübingen. He wished to teach but failed to pass the French civil service exam. He joined Radio France as a journalist and translator and hosted The French Cultural Hour. In 1954 he began to write for Le Monde and Le Figaro. From 1958 to 1968, he was the chief editor of Plon, a French publishing house. In 1967 he published his first novel, which was awarded the Grand Prix du roman de l'Académie française. The Ogre, his second novel, was my introduction to Tournier. A friend, who also admires Tournier, told me The Golden Droplet surpassed Ogre for sheer power of the prose, comic touches, and a level of profound insight. The hunt was on. Thanks to on-line book searches, I found a copy.

The Golden Droplet tells the story of Idris, a Berber sheep herder who lives at the Tabelbala Oasis in Algeria. One day, a blond woman stops and asks to take his picture. She promises to send it to him when she gets home to Paris, France. The village only had one photo at the time – that of a hero of the French Army in World War II. Idris saw this photo as an opportunity to raise his status in the remote desert community.

Months passed, but no photo arrived. Faced with marrying a woman he did not love, Idris sets out on a picaresque journey to find the blond woman and retrieve his photo. Idris starts out walking, then after a series of hitchhiking adventures, finds himself in La Goutte D’or [The Golden Droplet], which is the name of the Arab slums inhabited by immigrants from North Africa.

Tournier has embedded subtle humor in his prose. For example, Tournier writes, “Idris remembered the glass-fronted cabinets of the museum in Beni-Abbès; they were shop windows in miniature, But … a shop window worthy of the name is sealed off by a partition. It forms a closed area, at the same time totally exposed to the gaze and inaccessible to the hands, impenetrable and yet without secrets, a world you may only touch with your eyes but which is nevertheless real, in a way illusory like the world of photography or television. A fragile, provocative safe, a shop window is just asking to be broken into” (144).

If the novel has any faults it involves quite a few Berber words without translation. A few could be worked out from context, Google provided the definition of a few more, but the majority eluded me. After about 50 pages of this, I began to mark the words only for later research. After another 50 pages, I stopped even that, as I slid into this story’s absorbing prose, and these mysterious words became ornaments I actually enjoyed.

The Golden Droplet is an interesting and profound story of sight, images, memory, and how an immigrant spreads his culture while adapting to his or her new home. 5 stars