The Odyssey by Homer, trans Robert Fagles and read by Ian McKellan & Crime and Punishment by Fyodor Dostoevsky, read by George Guidall 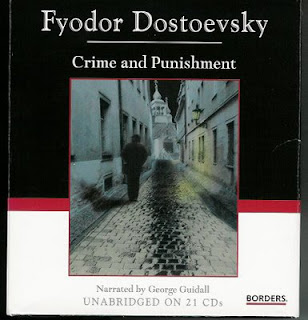 We recently took our annual road trip to Tennessee (to visit the grand kids), Kentucky (to grade the AP English Literature exam), and to Philadelphia to visit my family. The first stop was Knoxville, about 18 hours from home, then 4 hours to Louisville, then 11 to Philly, then about 30 back to Waco. So we had about 60+ hours in the car over two weeks. Last year we tried audio books for the first time, and this year we did it again.

I count this as a read for two reasons: first, I have read The Odyssey many times, and, since it is part of my syllabus for the fall, I am reading it again in print. I also include Crime and Punishment, because I read it about thirty years ago, and I am still pretty familiar with the story.

Both these readers did outstanding jobs. McKellan had a suitably classical voice and did an admirable job changing up the voices in long passages without clues to the identity of the speaker. His soft and lovely tones perfectly fulfilled my idea of my favorite character from Greek mythology – Athena, sea-green-eyed goddess. I found myself making notes of passages I had forgotten since the last time I read it (the Fitzgerald translation, about ten years ago). The chapter clues on the CDs made this relatively easy. I carried the Fagles paperback with me and marked passages when we stopped at night.

The Dostoevsky was another matter. Many of the details and characters escaped me, but Guidall’s voice made following this intense psychological portrait quite enjoyable. He had a whole arsenal of voices for the different characters, and he kept them at a consistent rhythm and pitch throughout.

Despite my enjoyment, I steadfastly maintain an audio book will never substitute for reading – especially for a book I have not read. However, I will say it made the miles flew by! The trip turned out a lot less stressful than some others we have taken. So, I think this will become a tradition on our road trips. That and Starbuck’s! Five stars each.