I read this back in the 60s when it was all the rage, and I failed to see the point. Of course, I have undergone countless changes since then, so I thought the time had come to give it another try. Good move. I have an enormous, new-found respect for this novel. It confirmed some things I believed and taught me quite a few new things. Every reader should bring something to the story and take away new insights.

The Siddartha of the title, born into a Brahmin family around the time the Buddha first emerged in the 6th-5th century b.c.e., senses dissatisfaction with his life. Like Gautama Buddha, Siddhartha’s family had amassed great wealth and lived a privileged lifestyle. However, both young men decide to leave all that behind and explore the world. Siddhartha becomes an ascetic and encounters Gautama Buddha shortly after he achieves enlightenment. He reveres the Buddha but does not become a follower. Rather, he leaves on another journey that will have profound effects on his life. Siddhartha meets a number of teachers during his journeys, and each one adds lessons to his life. 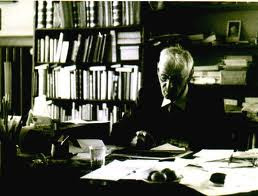 Numerous passages struck me, but this one had particular significance. “One can convey knowledge but not wisdom. One can find wisdom, one can live it, one can be borne by it, one can work wonders with it, but one can neither speak it nor teach it” (111). This statement represents Siddhartha’s great discovery. He recognizes the achievement of Gautama Buddha, but he senses each person has to travel the path alone and discover -- for him or herself – Nirvana. This idea mirrors an identical idea of Krishnamurti, who became a great teacher, and then walked away from his followers telling them they did not need him.

My version of the book has extremely helpful introduction and notes by Robert A. F. Thurman, who teaches Buddhist studies at Columbia University. These long end notes provide explanations for some of the more esoteric philosophical terms and ideas expressed by Hesse. Do not skip them!

We all meet people, learn things, gather insights, experience epiphanies, but assembling these into a coherent personal philosophy can be elusive for many of us. Knowing what to accept, what to reject, what to hold for further examination is a complicated process that requires an open mind and a great deal of patience. This central lesson of Hesse’s novel made my reading more than worthwhile. Deep down, I knew this, but seeing the effect it can have is an epiphany in itself. An inspiring and thought-provoking novel everyone can enjoy. 5 stars