Educating Alice: Adventures of a Curious Woman by Alice Steinbach

I found this September read for my book club mildly interesting with a few annoyances. Perhaps the teacher in me came on too strong, but I think the “adventures” she recounts were more an excuse for paid vacations and free travel than learning things as she proclaimed in her preface. Steinbach had an idea for a book, and convinced the publisher to bankroll these trips. If not, she got in a lot of traveling on the tax payers dime.

After all, how much could she learn arriving halfway through an eight-week course on cooking in Paris – missing all the basics – and then leaving a week before the class concluded? The trip to Havana was another example. She went there to study the art and architecture of Cuba, but spent most of her time in clubs and bars dancing and listening to local musicians.

Not that the book is entirely without merit. I loved the chapter on her visit to Winchester and a gathering of aficionados of Jane Austen. She really did learn something, and so did I. Even this adventure had a minor annoyance. She proclaimed she loved Austen, whom she had read since she was twelve. Then she frets about matching Emma with Mr. Darcy – too big a mistake for anyone who read Austen more than once to make! She did become adept and turning away questions about arcane details in Austen’s novels.

If I had never visited Florence, Italy, her chapter on this magnificent city would have done nothing to make me start planning a trip there.

Another chapter I really enjoyed was the adventure set in Prague. Mostly this one revolved around Czech literature and writers. I also got a tip on an interesting novel, Dancing Lessons for the Advanced in Age by Bohumil Hrabal. This novel is one long sentence. I also picked up some ideas for exercises in my creative writing class. 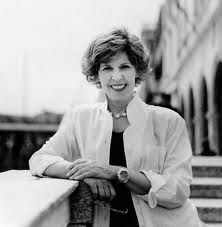 Her relationship with a Japanese man also intruded a bit too much into the story for my tastes. Not only did he show up twice, but she felt compelled to include letters updating him on her adventures, as well as some comments which hinted that the relationship was more than mere pen pals.

If I were reading this book on my own, I would have skipped some of the chapters after a couple of pages. But, since my book club was reading it, I felt I should slog through. The opinion of the club members seemed decidedly mixed. (3 stars)