We the Animals by Justin Torres

Recently, I reviewed a novel I bought solely on the basis of an intriguing cover. That turned out to be an excellent purchase. We the Animals by Justin Torres, on the other hand, intrigued me because of the blurbs by two authors I admire: Michael Cunningham and Marilynne Robinson.

This taut, brief novel tells the story of a Puerto Rican family in Brooklyn: Paps, Ma, and three brothers, Manny, Joel, and the narrator, the youngest of the sons.

Intense, gritty, and sometimes horrific, the story of a rather dysfunctional family held me spellbound for its entire length. Torres captures the dynamics of this family with a brutal realism. A sequel to this novel -- set 20 years later -- will feature the family broken up, and all in therapy or worse.

While I understood what these three boys experienced, I shudder to think of the myriad families across America today living under similar circumstances. I imagine few of these families will ever have the opportunity for a real, safe, life, let alone any kind of therapy to reach that goal.

Torres sprinkles animal references throughout the novel. He describes Paps, as “like an animal, … ruddy and physical and instinctive; his shoulders hulked and curved, and we had each of us, even Ma, sat on them, gone for rides” (45).

Paps and the boys frequently play rather rough. In one scene, Torres writes, “We hit and we kept hitting; we were allowed to be what we were, frightened and vengeful – little animals, clawing at what we needed” (51). Even Ma gets the animal treatment: “Ma choking on words, the croak in her throat,” (72).

One day, the narrator comes home to find his family assembled with his secret journal. Torres writes, “In bold and explicit language I had written fantasies … about what I wanted done to me” (116). Paps says, “I will kill you” (116). Ma, tears streaming down her cheeks, says nothing. Manny and Joel glared. Then, “I could have risen; I believe they would have embraced me. Instead, I behaved like an animal. I tried to rip the skin from their faces, and when I couldn’t, I tried to rip the skin from my own. They held me down on the ground; I bucked and spat and screamed my throat raw. I cursed them: we were, all of us, sons of whores, mongrels” (118). 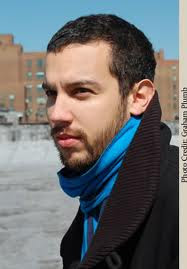 The narrator is bundled into a car and taken to psychiatric hospital. The last page contains the last chapter, and it brought tears to my eyes.

I revealed more of the plot this time than usual, but that is because the plot is a distant third to the characters and the atmosphere Torres has created. This first novel portends great things from, as Cunningham wrote, “a brilliant, ferocious new voice.” (Jacket). 5 stars