A Happy Death & The Stranger by Albert Camus

On November 7, 1913, Albert Camus was born in Algeria.  He attended at the University of Algiers, where he was goalkeeper for the university team.  He contracted tuberculosis in 1930.   He completed his Bachelor’s Degree philosophy in 1935, and in May 1936, he successfully presented his master’s thesis on Neo-Platonism and Christian Thought.  During the war Camus joined theFrench Resistance cell Combat, which published an underground newspaper of the same name.  This group worked against the Nazis, and in it Camus assumed the nom de guerre Beauchard.  Camus became the paper's editor in 1943.  He met John-Paul Sartre at the dress rehearsal of Sartre's play, The Flies, in June 1943.  When the Allies liberated Paris in August 1944, Camus witnessed and reported the last of the fighting.  Camus won the Nobel Prize for Literature in 1957.  In the words of the committee, he received the award for "for his important literary production, which with clear-sighted earnestness illuminates the problems of the human conscience in our times."

I have long admired Camus for his thoughtful, provocative, and stimulating novels.  The Stranger and The Plague frequently appear on college reading lists in world literature and great books classes.  This review will depart somewhat from my usual reviews, because Camus is a serious writer with a decidedly philosophical bent.   While Camus is frequently associated with Existentialism, he rejected this label.  He broke with his friend Sartre over several issues, but Sartre’s nihilism topped the list.  Camus believed that life itself was much too valuable to throw away.  He once wrote, “Your duty is to live and be happy.”

The posthumously published A Happy Death foreshadows the work he is most known for, The Stranger.  As notes in the book reveal, the main difference between A Happy Death and The Stranger lies in the fact that Camus the man is much more present in the former work than the latter.
I first encountered Camus back in the 70s.  The prose mesmerized me and drove me to dig deeper into his life.

In Happy Death he wrote: “Summer crammed the harbor with noise and sunlight.  It was eleven thirty.  The day split open down the middle, crushing the docks under the burden of its heat.  Moored at the sheds of the Algiers Municipal Depot, black-hulled, red-chimneyed freighters were loading sacks of wheat.  Their dusty fragrance mingled with the powerful smell of tar melting under a hot sun.  Men were drinking at a little stall that reeked of creosote and anisette, while some Arab acrobats in red shirts somersaulted on the scorching flagstones in front of the sea in the leaping light” (8).  This reflects Camus’ memory of the working class district he lived in and his job with the maritime commission. 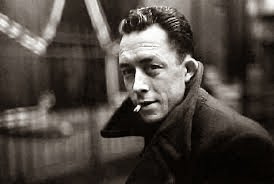 The Stranger and Happy Death deal with a murder by the main character, Patrice Merseult.  While there are similarities, substantial differences also separate the two stories.  Camus expert, Roger Quillot explicated these differences.  He wrote, “Mersault is … the younger brother of Mersault’ [in The Stranger] (165).  Another critic Jean Sarocchi asserts that Happy Death is a “prefiguration of The Stranger.”  This view is based on the comparison of the structure of the two texts.