The Physick Book of Deliverance Dane by Katherine Howe

While Katherine Howe studied for her PhD qualifying exams, she took walks with her dog in the woods around Marblehead and Salem, MA. During these rambles, she began to spin a mildly interesting tale two of her ancestors persecuted during the Salem Witch Trials of the late 17th century. One of her ancestors, Elizabeth Proctor, survived, because she was pregnant. Fortunately, the hysteria had died down by the time the she delivered her child. The other, Elizabeth Howe, was hanged.

Connie Goodwin, a PhD candidate at Harvard, receives a phone call from her new age mother in New Mexico. Grace Goodwin asks her daughter to clean out an old house in Marblehead, which belong to Grace’s mother and prepare to sell it.

Her first visit to the house involved overgrown vines and creaky gates, but I did not get a creepy, gothic feeling from the prose. In fact, the lack of atmosphere is only the beginning of the writing flaws in this novel. Awkward sentences, fact errors, and plain dumb rookie writing mistakes all mar what could be a quite interesting and atmospheric tale. 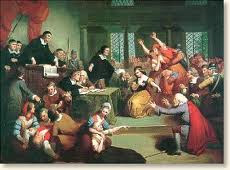 For example, she claims the witch trials were “before [emphasis Howe’s] the Scientific Revolution. They didn’t have the scientific method” (82). Rudimentary explanations of investigations of nature with strong parallels to the scientific method date back to an Egyptian papyrus from circa 1600 b.c.e. The ancient Greeks had steps for scientific inquiry, as did the Babylonians, the Arabs, and the sub-continent Indians. Frances Bacon, Descartes, and Newton all laid down principles for scientific investigation. With the founding of the Royal Society of Science during the restoration in 1660s England, the steps, still in use today, were firmly established. She also displays an alarming thinness of knowledge of common historical facts – things even my ancient minor in history allowed me to recall. Howe is an historian?

Here is one example of her sometimes awkward style. “[Connie] placed the lamp on the mantelpiece, resting her elbow next to it and gnawing on a knuckle” (111). Other examples are shifts in point of view. During a phone conversation with her mother, Connie describes an unpleasant encounter with her PhD advisor. “’He sort of … screamed at me’” (165), . . . “‘but it totally wasn’t a big deal,’ at the same moment that Grace cried. ‘Oh, Connie!’ and threw down her crochet hook in irritation” (165). 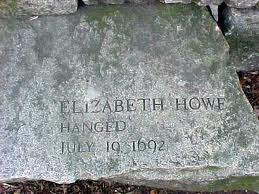 The best part of the book, for me, was the “Interludes.” These flashbacks to the witch trials offered an interesting glimpse into a terrible episode in our history.

Okay, if these things don’t bother you, then this will make a fine beach read this summer, but not much else. (3 stars)

I finished this novel. It was difficult, though, as the main character was a pretentious bore! The historical trials, as you say, were the most interesting part. I think your 3 stars are very generous.

I was actually googling Homer and Langley and your review popped up! I have really enjoyed browsing through your selection.

I couldn't agree more with your favourite Australian writers - I particularly love Malouf. I would also strongly recommend the novel Eucalyptus by Murray Bail and The Book Thief by Markus Zusak. Apologies if you have already reviewed them - I am still ploughing through your wonderful blog!

Great! I will track it down.

What do you do in Australia? How is the weather these days in elbourne? We have had over 60 days of 100 degree (F) temperature. Is that about 45 C?

I manage governance for one of the faculties in a university down here. I really enjoy working in a vibrant learning community, although students (like policemen) seem to get younger each year!

It's been quite cool here, although our winter is very mild compared to some areas in North America. Our average temperature has been about 15 C (59 F). The temperature that you mention is about 37 C. Our summers can be quite mild, too, but with periods of extreme heat. The hottest day in Melbourne that I can recall was 46 C (115 F). That was in 2009 and is known as Black Saturday, as 173 people died in ferocious bush fires. It was so hot I hadn't put my nose outside all day. When I finally did go outside at about 5pm, the sky was cast with smoke and deep red. I looked at that sky and had a deeply felt sense that the world was not right.

I really liked the cover, especially the back flap that can be used to mark your page. A nice extra touch! I also think this book would be a great choice if you're looking for some escapism reading this summer. It's a fast and easy read that doesn't require much effort on the reader's part.