Stephen Harrigan is the author of the best-selling novel, The Gates of the Alamo. His newest work of fiction is Remember Ben Clayton. Francis “Gil” Gilheaney is a talented sculptor who moves his family from New York to San Antonio, Texas to take advantage of a growing reputation for western-themed works of art. When Lamar Clayton, a crusty rancher, offers him a commission to create a statue to commemorate his son, Ben, killed in World War I, Gil sees it as an opportunity to sculpt a lasting legacy of his life’s work. But everyone involved with this project harbors secrets. Set in Texas and France in the aftermath of “the war to end all wars,” Harrigan has captured the brutality of war, family relationships, and the role and meaning of art.

I must admit, I was not excited about this novel when our local NPR station asked me to review and interview the author for a segment. Literature of the western US is not what I read – as faithful fans of RabbitReader well know! But I read the first chapter and I was hooked. [Right now, I only have an uncorrected proof. I will insert the paragraphs from page 9 when I get a trade edition.]

The battle scene of World War I and the cleanup in the aftermath of the war particularly affected me. We have so many novels on this subject – Remarque, Crane, Heller, Mailer, O’Brien – yet time and again we plunge our young men, and now women, into war. Why haven’t we learned – and remembered -- the lesson of the horrors of war?

The beginning of the novel’s main story-line – about 1920 – was a bit slow at first, but it had enough meat to keep me chewing. As I began to delve into the secrets these characters held, my interest piqued. As the novel reached its climax, one secret after another came out; I expected one or two, but the majority came as a surprise. 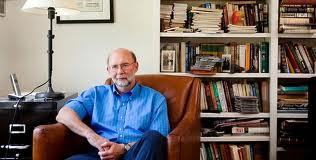 The prose is sparse and reminds me of Hemingway, but it fit the characters perfectly. The musings of the characters on art and its role in society – and what it means to an individual artist – were exceptionally absorbing. I could not help comparing the extensive research, planning, playing with his materials to the same things writers go through when creating a poem, a story, or a novel.

This novel should appeal to a wide audience – fans of cowboy lit, fans of historical fiction, and artists of all stripes. Due for publication in May of this year, I will repost this review then. 5 stars