The Particular Sadness of Lemon Cake by Aimee Bender

The publication page of Aimee Bender’s The Particular Sadness of Lemon Cake, reads: “1. Taste—Fiction. 2. Family Secrets—Fiction.” Normally, I rarely look at this page before reading a novel, but, while searching for my next read after a couple of complicated novels, I stumbled on the page and immediately decided to try Bender out.

The premise is as interesting as the Sears’ Subject Headings librarians use to categorize books into neat compartments. Rosie is about to turn eight, and her mother, Lane, bakes her favorite cake. Rosie spies the finished cake and a bowl of icing nearby, while her mother naps, waiting for the cake to cool. Rosie helps herself to a chunk and slathers icing on it. Bender writes,

“To be clear: the bite I ate was delicious. Warm citrus-baked batter lightness enfolded by cool deep dark swirled sugar.

“But the day was darkening outside, and as I finished that first bite, as the first impression faded, I felt a subtle shift inside me, an unexpected reaction. As if a sensor, so far buried deep inside me, raised its scope to scan around, alerting my mouth to something new. Because the goodness of the ingredients – the fine chocolate, the freshest lemons – seemed like a cover over something larger and darker, and the taste of what was underneath was beginning to push up from the bite. I could absolutely taste the chocolate, but in drifts and traces, in an unfurling, or an opening, it seemed that my mouth was also filling with the taste of smallness, the sensation of shrinking, of upset, tasting a distance I somehow knew was connected to my mother, tasting a crowded sense of her thinking, a spiral, like I could almost even taste the grit in her jaw that had created the headache that meant she had to take as many aspirins as were necessary, a white dotted line of them in a row on the nightstand like an ellipsis to her comment: ‘I’m just going to lie down.” (9-10)

This really long, absorbing sentence captures the gift – or the curse – Rosie must learn to live with for quite a few years.

Rosie’s brother, Joseph, also has a mysterious gift, but in an entirely different direction. Her reclusive grandmother also has some secret. In fact, all the members of the Edelstein family harbor strange, inner fantasies, which reveal themselves in odd behavior.

Joseph has plans for a brilliant career in physics; however, his friend George receives an acceptance to CalTech, but Joseph is rejected and ends up unhappily in a small local college. Bender describes Joseph as, “brilliant, adults often said as they shuttled out of the house, shaking their heads at the precise drawing he’d made on sketch paper of planets yet to be discovered, complete with atmosphere thicknesses and moons. Our mother lowered her eyes, pleased. I was often admired for being friendly.” (40)

To the consternation of Rosie and her parents, from time to time he disappears without a trace, then, just as suddenly, reappears. Rosie has a crush on George, especially after he believes her claim of “tasting the emotions of people who make the food she eats.” Lane tells Rosie, “Such a sweet supporter you are. Much nicer than your father.” (42) Paul, Rosie’s Dad, a moderately successful attorney on the other hand, describes himself as “without any special skills” (108 et al).

Rosie reduces herself to eating “factory” food, made strictly by machines. However, she does do some cooking of her own, and tastes, “Sadness, rage, tanks, holes, hope, guilt, tantrums. Nostalgia, like rotting flowers. A factory, cold.” (222) 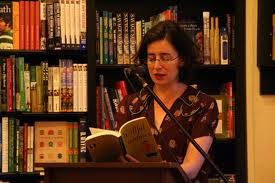 In The Particular Sadness of Lemon Cake, Bender has put together a story with prose which runs like a quiet stream in the coolness of a fall afternoon. I could hardly admire her and her work any more than I do. 5 stars