José Saramago won the Nobel Prize in 1998. He died in 2010, and Cain is his last novel. While it takes a bit of effort to get used to his style, his books are a lot of fun and well-worth the effort. In The Stone Raft, a geologist discovers a fissure in the Pyrenees Mountains. He returns for further investigation to find the gap has widened. Eventually, Spain and Portugal break off from Europe and float out into the Atlantic Ocean, narrowly missing the Canary Islands. Blindness is a retelling of Camus’ novel, The Plague, and All the Names involves a clerk in a registry office who becomes obsessed with a card accidentally removed from a drawer.

Cain recounts the story following the expulsion of Adam and Eve from the Garden of Eden and the murder of Abel. Marked by the Lord and condemned to wander the earth, Cain slingshots from various places and time periods to witness events in the Old Testament. He sees Abraham preparing to sacrifice his son, Isaac; he sees the remains of the Tower of Babel; he hitches a ride on Noah’s Ark; he spends some time working for Job, until his fortunes take a downturn; Cain spends some time with Joshua before the trumpets blare; and he is present when Moses comes down from the mountain. In all of these encounters, Cain questions the actions and motives of God.

At the conclusion of the novel, when Noah tries to complete the Ark on time and in budget, God sends an army of angels to assist with the construction. Cain engages them in a conversation about the Lord. The following two passages are reproduced exactly as printed to give an idea of Saramago’s style. Cain establishes a friendly bond with some of the angels, who claim, “happiness on earth was far superior to that in heaven, but the lord, of course, being a jealous god, must never know this, because if he did, such seditious thoughts would merit the severest of reprisals with no regard for the perpetrators’ angelic status” (144). He likes long sentences and he is stingy about paragraphing and capitalization.

Cain replies, “if they really thought that, once this humanity had been destroyed, the race that followed would not fall into the same errors, the same temptations, the same follies and crimes, and they answered, We are mere angels, we know little about the incomprehensible charade that you call human nature, but to be perfectly frank, we don’t see how the second experiment will be any more satisfactory than the first, which ended in the long string of miseries we see before us now, in short, in our honest opinion as angels, and considering all the evidence, we don’t believe that human beings deserve life” (144-45). 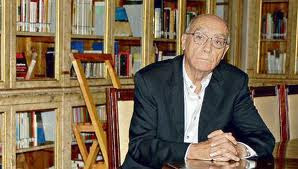 The dust jacket quotes John Updike on the author. “Saramago is a writer, like Faulkner, so confident of his resources and ultimate destination that he can bring any improbability to life.” I am in complete agreement. José Saramago’s Cain is a fun, thought-provoking, and interesting rational look at some of the best-loved stories of the Old Testament – a great place to begin exploring this amazing author. Five stars.
--Chiron, 4/10/13