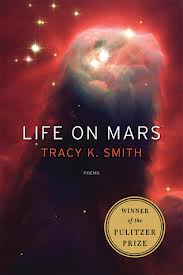 In Waco, April means the Beall Poetry festival at Baylor University.  In 1994, Mrs. Virginia B. Ball established the John A. and DeLouise McClelland Beall Endowed Fund to honor her parents and to encourage the writing and appreciation of poetry.  Mrs. Ball was an English major who graduated from Baylor in 1940.  Since 1995, the festival has celebrated some of the finest contemporary poets with readings, a panel discussion, and a lecture on contemporary poetry.  Some of the invited participants include Donald Hall, Gary Snyder, Derek Walcott, Maxine Kumin, Galway Kinnell, Billy Collins, W.S. Merwin, Robert Bly, Philip Levine, Adrienne Rich, Louise Glück, Charles Wright, and Anthony Hecht.


Tracy won the Pulitzer Prize for her third collection of poetry, Life on Mars.  She read several poems at her reading, so I had a tough time selecting my favorite.  Even after a couple of reads, the power of description and the emotion in these poems shine through to this reader.  “The Good Life” well-represents her talents:.

“When some people talk about money / They speak as if it were a mysterious lover / Who went out to buy milk and never / Came back, and it makes me nostalgic / For the years I lived on coffee and bread, / Hungry all the time, walking to work on Payday / Like a woman journeying for water / From a village without a well, then living / One or two nights like everyone else / On roast chicken and red wine.”  (64).

It must be obvious I like short poems, and here is another, titled “The Soul”:

“The voice is clean.  Has heft.  Like Stones / Dropped in still water, or tossed / One after the other at a low wall. / Chipping away at what pushes back.  Not always making a dent, but keeping at it. / And the silence around it is a door / Punched through with light.  A garment / That attests to breasts, the privacy / Between thighs.  This body is what we lean toward, / Tensing as it darts, dancing away. / But it’s the voice that enters us.  Even / Saying nothing.  Even saying nothing / Over and over absently to itself.” (23).

A good poet, in my opinion, is one who consistently produces thought-provoking poems, with imagery that rakes my imagination over cooling coals of emotion, then leaves me with a smile, or maybe a frown, or even laughter at the clever connections to my life, loves, and experiences.  Tracy K. Smith is one of those poets.  5 stars..