My Life in Middlemarch by Rebecca Mead

Recently, I mentioned my interest in nineteenth century women writers including George Eliot.  Her greatest work is Middlemarch, the quintessential novel of the nineteenth century.  While reading the book for that review, I came across a book about Eliot’s wonderful tale of life in the fictional town of Middlemarch, something like Coventry, England.

Rebecca Mead is a staff writer for my favorite magazine, The New Yorker.  Eliot’s novel profoundly influenced her love of reading, and, while she admits to slacking off on the amount of books she reads, she still has a special, intimate corner of her mind firmly fixed in Middlemarch.  My Life in Middlemarch examines the qualities of the novel which make it the great piece of literature it has become.  I remember the first time I read this novel, and I immediately became awestruck by the power of the prose, the meticulous detail, and the close bond I developed with the characters.  Middlemarch grabbed me by the lapels, dragged me into the nineteenth century, and introduced me to all the residents there – Jane Austen, Charlotte, Emily, and Anne Brontë, Elizabeth Gaskell, and, of course, George Eliot. 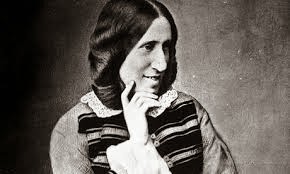 Born Mary Ann Evans to Robert Evans, the manager of the Arbury Hall Estate for the Newdigate family in Warwickshire, in 1818.  She lived a rather unconventional lifestyle for the nineteenth century, and adopted a male pseudonym.  She wanted her fiction to be taken seriously and separate herself from most female writers of the century know for light comedies.  She also wanted to shield herself from criticism because of a long-standing affair she carried on with the married George Henry Lewes, whom she met in 1851.  They began living together in 1854 until his death in 1878.  While many Victorians carried on affairs, Eliot and Lewes scandalized the world because of their open admission.  They considered themselves married for the rest of their lives.  She died in 1880.

Mead focuses on the effect the novel had on her from her first encounter with Eliot at age 17.  She quotes extensively from the novel, letters, and contemporary reviews and comments by those who knew George.  She also explains her philosophy of books, writing, and reading.  Mead writes, “Reading is sometimes thought of a s a form of escapism, and it’s a common turn of phrase to speak of getting lost in a book.  But a book can also be where one finds oneself; and when a reader is grasped and held by a book, reading does not feel like an escape from life so much as it feels like an urgent, crucial dimension of life itself.  There are books that seem to comprehend us just as much as we understand them, or even more.  There are books that grow with the reader as the reader grows, like a graft on a tree” (16).  Rebecca mead and I have a lot in common!

One frequent source for Mead is Virginia Woolf.  Rebecca writes, “the early works, Scenes of Clerical Life, Adam Bede, and The Mill on the Floss, … seem drawn from Eliot’s own rural experience and are peopled with characters so true to life that readers forget they are fictional” (45).  She then quotes, Woolf, “‘We move among them, now bored, now sympathetic, but always with that unquestioning acceptance of all that they say and do, which we accord to the great orginals only.  We scarcely wish to analyse [sic] what we feel to be so large and deeply human’” (45-46).

I haven’t read Middlemarch in quite a few years, but I will get back to it soon.  If you haven’t read it, Rebecca Mead’s My Life in Middlemarch will surely whet you appetite for one of the most noted authors of the nineteenth century.  5 platinum stars.