When I first attended grad school at Baylor University, I felt pretty certain my area of research would focus on 19th century women writers – Austen, the Brontës, Gaskill, and Eliot.  However the influence of time, tides, and professors I admired, shifted my vision towards other vistas.  Nevertheless, I still have a great affection for these marvelous story tellers.

Margaret Drabble holds an exalted place in this coterie of British Women novelists.  She has written 16 novels, a collection of stories, biographies of Angus Wilson and Arnold Bennett, as well as the role of editor for the 5th and 6th editions The Oxford Companion to English Literature.  The dust jacket of her 17th novel informs me that for her contributions to English Literature, the Queen named her a Dame of the British Empire in 2008.  Her sister is the Book-Prize winning author of Possession, A.S. Byatt.

Drabble is one of those writers who causes me to pounce on the latest novel.  The Pure Gold Baby did not disappoint.   Nellie narrates the story years later.  She is a friend of Jessie’s, a graduate student in anthropology, who finds herself pregnant after an ill-advised affair with one of her professors.  She conceals the name of the father from all her friends, and decides to raise the child, Anna, on her own.  At first, Anna seems perfect.  The child has great beauty, pleasant and polite personality, and she always smiles. Anna anxiously tries to please not only her mother, but the circle of friends who enclose Jessie and Anna as a protective shield.

Drabble writes detailed descriptions, mixing the ordinary with the unusual, the everyday with the rare and wonderful.  She writes: “Jess walked towards Enfield Lock and the canal and the River Lee, and then began to walk, thoughtfully, reflectively, receptively, along the tow path.  Anna liked the water.  Anna Jess thought, would like the water walkway.  The lock was old and quiet, with a stationed narrow boat and a cluster of old buildings from another age – the dark-brick lock-keeper’s cottage with white fretted wooden gables, a row of tidy little houses, a pub called the Rifles.  Jess sensed there was a historic arsenal connection here, as in Highbury, a military link, but the waterside this day was peaceful in the sun.  The track was overgrown with elder and buddleia and nettles, with long greens and purples.  Jess walked on and through a gate and over a wooden stile, and the water flowed strongly.  She had left the placid canal bank and joined the path of the deep full river.  A warning notice leaning rakishly on a rotting board told her the water was deep and dangerous.  Small golden-winged birds flew in swift flurries in a light June breeze through tall willows and reeds.  Dark dragon flies. blue-black, hovered and coupled over the rapidly moving surface. 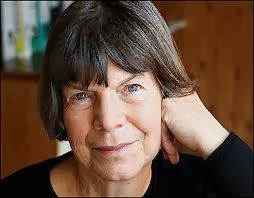 I learn a lot from her novels.  I find myself Googling images of stiles, buddleia, and dragon flies, along with a healthy scoop of unfamiliar words.  I have 14 of her novels, and I am reminded the time has come to fill out my collection.  The Pure Gold Baby shows Drabble is still at the height of her power as a novelist, and clearly deserves -- 5 stars.
Posted by Chiron at 3:08 PM