One of the delights of belonging to a book club comes from reading books which might never have come across my radar.  Mr. Penumbra’s 24-Hour Bookstore by Robin Sloan has become the latest in a long list of wonderful reads suggested by my friends and colleagues.


Robin Sloan’s first novel was enthusiastically recommended by one of the regular members of my club.  Because of teaching responsibilities, I did not sit down to read this novel until a bare 72 hours before the meeting.  After I had only reached page nine, I knew I would love this novel.


The author’s note in the book has only a single sentence: “Robert Sloan grew up in Michigan and now splits his time between San Francisco and the Internet.”


Clay Jannon designs websites for a bagel company, but the great recession of 2008 intervenes, and the company goes under.  He has no luck finding a job, until one day he happens to pass Mr. Penumbra’s 24-Hour Bookstore, which has a “help wanted” sign in the window.  Nearing desperation, he enters to inquire about the job.  He immediately discovers that he has not entered an ordinary book store.  The shelves, which line the walls, go up 30 feet.  A tall, soft spoken, skinny man emerges, and asks, “What do you seek in these shelves?” (8).  He responds, “I am looking for a job” (9).  When Clay admits he has no bookstore experience, Mr. Penumbra says, “Tell me about a book you love.” // “it’s not one book, but a series.  It’s not the best writing and it’s probably too long and the ending is terrible, but I’ve read it three times, and I met my best friend because we were both obsessed with it back in sixth grade.” // “I love The Dragon-Song Chronicles” (9). 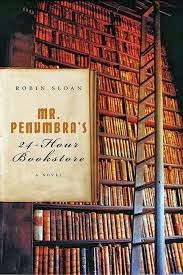 Clay gets the job, and begins to understand exactly how unusual this bookstore really is.  First of all, he rarely has more than one customer a week, and he or she never buys anything.  The customers return a large book, wrapped in brown paper, and ask for another.  Clay checks the computer catalog for the shelf number, takes the customer’s account number, climbs the ladder, retrieves the book, which he wraps in brown paper, and the customer leaves with another book.


Mr. Penumbra has warned Clay not to look at the books, so this already provides enough mystery for a whole sack of detective stories.  To while aware the night, Clay plays with his laptop and begins making a digital map of the store.  He discovers a peculiar pattern in the books returned and taken.  He meets a young woman, Kat, who works for Google, and Clay shares the details of the bookstore with her. 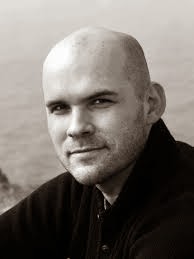 The mystery takes Clay, Kat, and Neel – Clay’s 6th grade best friend – to New York to the main library and headquarters of the company which owns Mr. Penumbra’s.  The library is presided over by strange men, known as readers, who dress in robes reminiscent of medieval monks.  This library contains books similar to the ones at Mr. Penumbra’s.

This only scratches the surface of the story, so I urge you to track down a copy of Mr. Penumbra’s 24-Hour Bookstore by Robin Sloan, and immediately begin reading.  This intelligent, informative, funny, exciting, interesting, and most difficult to close for the night novel is a must read.  5 stars.
--Chiron, 3/27/14
Posted by Chiron at 2:04 PM