The Lover by Marguerite Duras

Marguerite Duras is most known for her screenplay of the successful 1959 French film Hiroshima Mon Amour, directed by Alain Resnais.  However, my favorite of her books is the faintly autobiographical novel The Lover, published in 1984, which won the prestigious Goncourt Prize in French literature, given by the Académie Goncourt to the author of "the best and most imaginative prose work of the year."

Duras was born in French Indochina (now Vietnam), after her parents responded to a campaign by the French government encouraging people to move in the colony.  Marguerite's father fell ill soon after their arrival, and returned to France, where he died. After his death, her mother, a teacher, remained in Indochina with her three children. The family lived in relative poverty after her mother made a bad investment in an isolated property. The experience greatly influenced her writing. An affair between the teenaged Marguerite and a rich merchant, provided the basis for The Lover.  She also reported being beaten by her mother and her older brother. 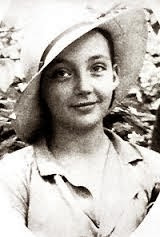 At 17, Marguerite went to France, where she began studying mathematics.  This she soon changed to political science and then law.  In the late 1930s she worked for the French government office representing the colony of Indochina.  From 1942 to 1944, she worked for the Vichy government in an office that allocated paper to publishers, but she was also a member of the French Resistance. In 1943, she published her first novel, Les Impudents, using the pen name “Duras” after a village where her father owned a home.  Her early novels were romantic and conventional; however, she gradually became more experimental. The Lover became a New York Times best seller.  April 4, 2014 would have been the centenary of her birth.

The Lover tells the story of a young girl living in French Indochina with her mother and two brothers.  The novel is a detailed psychological exploration of a young girl’s “coming of age” and search for love in a dysfunctional family.  Her descriptions are ethereal and haunting.  Duras wrote,

“I can’t really remember the days.  The light of the sun blurred and annihilated all color.  But the nights, I remember them.  The blue was more distant than the sky, beyond all depths, covering the bounds of the world.  The sky, for me, was the stretch of pure brilliance crossing the blue, that cold coalescence beyond all color.  Sometimes, it was in Vinh Long, when my mother was sad she’d order the gig and we’d drive out into the country to see the night as it was in the dry season.  I had that good fortune – those nights, that mother.  The light fell from the sky in cataracts of pure transparency, in torrents of silence and immobility.  The air was blue and you could hold it in your hand.  Blue.  The sky was the continual throbbing of the brilliance of the light.  The night lit up everything, all the country on either bank of the river as far as the eye could reach.  Every night was different, each one had a name as long as it lasted.  Their sound was that of the dogs, the country dogs baying at mystery.  They answered one another from village to village, until the time and space of the night were utterly consumed.”  (82).

The Lover, by Marguerite Duras, first came to my attention after seeing the film Hiroshima Mon Amour.  I have wanted to get back to it for quite a few years, and I am glad I did.  This read, I enjoyed it even more than I did 30 years ago.  5 stars