Last year, I reviewed Margaret Atwood's latest book, of short stories, The Stone Mattress.  That excellent collection made me wonder why I had neglected this favorite writer in preparing my reviews.  I went through my library and picked one of her books I had read a long time ago for a re-read.  I settled on Selected Poems: 1965-1975.

Margaret Atwood was born in Canada on November 18, 1939.  She is a poet, novelist, literary critic, essayist, and environmental activist.  She won the Arthur C. Clarke Award for fiction, and she has been short-listed for the Booker Prize five times and won once for Blind Assassin.  She is also the founder of the Writers Trust of Canada, a non-profit literary organization that seeks to encourage Canada's writing community.  She has published 14 novels, 4 collections of short stories, essays, and three collections of un-classifiable short prose pieces.  While she is best known for her work as a novelist, she has also published 15 books of poetry.  Many of her poems have been inspired by myths and fairy tales, which have bee interests of hers from an early age.

Like most of her works, these selected poems deal with the situations women are forced into solely because of their gender.  One of her more horrific stories, The Handmaid’s Tale, foresees the ultimate result of confining women to a second class status.  These poems frequently address that issue, although she does it with allegory and stinging humor.

In a series entitled, “Circe/Mud Poems,” we find excellent examples of her power as a poet.  Covering 23 pages, these 24 poems include my favorites in the collection.  All are untitled as individual pieces. Atwood writes, “Through this forest / burned and sparse, the tines / of blunted trunks, charred branches // this forest of spines, antlers / the boat glides as if there is water // Red fireweed splatters the air / it is power, power / impinging, breaking over the seared rocks / in a slow collapse of petals // You move within range of my words / you land on the dry shore // You find what there is.” (201). 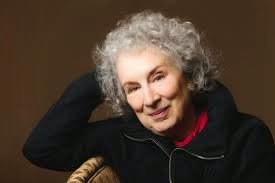 The second, quickly gets down to business.  “Men with heads of eagles / no longer interest me / or pig-men, or those who can fly / with the aid of wax and feathers // or those who take off their clothes / to reveal other clothes / or those with skins of blue leather // or those golden and flat as a coat of arms / or those with claws, the stuffed ones / with glass eyes; or those / hierarchic as greaves and steam engines. // All these I could create, manufacture, / or find easily: they swoop and thunder / around the island, common as flies, / sparks flashing, bumping into each other, // on hot days you can watch them / as they melt, come apart, / fall into the ocean / like sick gulls, dethronements, plane crashes. // I search instead for the others, / the ones left over, / the ones who have escaped from these / mythologies with barely their lives: / they have real faces and hands, they think / of themselves as / wrong somehow, they would rather be trees” (202).

I frequently hear students and interviewers ask, “What does this poem mean?”  The best answer is, “Whatever you think!”  So read these poems and decide for yourself.  No matter an individual’s answer, the power of her words, imagery, and illusions will bring a reader back to Margaret Atwood again and again.  Selected Poems, 1965-1975 is an excellent place to begin exploring the mind of this amazing woman writer.  5 stars