So It Goes, Kurt Vonnegut: A Life by Charles J. Shields

Back in the 60s, everyone read Kurt Vonnegut – for his humor, his satire, his snarky comments, and his off-beat and quirky style.  I tried Cat’s Cradle and Slaughterhouse 5.  I rated both “Meh!”  Recently I came across some of his later works, and I went back and re-read the two early novels.  While I didn’t really enjoy, the novels, I was curious about them.  Then, along comes a new biography of Vonnegut, And So It Goes, by Charles J. Shields.  Now I have a much better understanding of Vonnegut and a greater appreciation for his work.

Shields authored Mockingbird, a best-selling biography of Harper Lee.  A former teacher, Shields has served as a reporter for NPR, a journalist, and the author of several non-fiction books for children.  His biography of Vonnegut, is detailed, well-documented, and illustrated with several photos of important people and moments in the life of the quirky author.

Kurt Vonnegut had a difficult life.  He constantly found himself in the shadow of his older brother, Bernard, who informed the young Kurt he was “an accident.”  He also had a difficult relationship with his father.  Added to that was a rocky marriage complicated by the arrival several nieces and nephews orphaned by a train wreck (their father) and the death of Alice (their mother) of cancer a few days later.

At a party, Kurt sat down to play the piano.  Two women joined him, and the bench collapsed.  Shield’s writes, “Beneath the hilarity, though, several women got the impression that [Kurt’s wife] Jane, pregnant, already had two children on her hands: three-year-old Mark and her husband.  ‘Being Mrs. Vonnegut,” said one of her friends, ‘was not a nine-to-five-job because he was not inclined to do things for himself.’  When attention strayed from Kurt, she tried to direct it back to him.  He didn’t deem like the typical father, either, at least to another dad at the party – rather distant, in fact.  When Mark [Kurt’s son] rode his tricycle into the room, Kurt said quietly, ‘Mark, that’s gauche,’ and let it go at that.  Nevertheless, Jane whisked around the party, floating on happiness. // Two months later, on December 29, their second child Edith was born.”  (110). 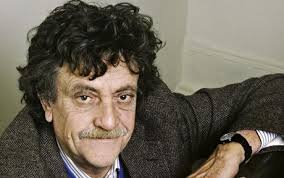 Vonnegut also had a peculiar relationship with his wife.  Kurt wanted to move to Cape Cod where he could befriend other writers, and have the peace and solitude he needed to write.  Shields explains, “From now on, they would live for the arts.  They would read the best and latest books, discuss them, make notes to each other in the margins, and give full rein to Kurt’s career in a location that couldn’t be more salubrious for creativity.  They must do it – to be true to themselves.  And for Kurt it was the vicarious realization of his mother’s dream to live and write on Cape Cod’ (118).  Vonnegut also agonized over the suicide of his mother.  This tragedy, together with his knotty relationships and his World War II experiences as a P.O.W. in Dresden during the horrific firebombing by British and American air forces, shaped his personality and informed his style.

Kurt Vonnegut is an important figure in post-war fiction.  Charles J. Shields’ biography, And So It Goes, Kurt Vonnegut: A Life sheds a brilliant light on this quirky writer.  It also led me to a better understanding of his fiction.  5 stars.

Marvelous! Could I encourage you to post your review on Amazon? I like to keep the reviews fresh, even when they're critical— the more, the merrier.