While searching for a novel with a title I could not quite remember, I stumbled on a similarly entitled book by Ian McEwan. I examined the dust jacket, and I bought it, because, judging by the cover, it sounded interesting. Several decades later, I eagerly await each new novel by this Booker Prize-winning author.

Ian McEwan’s latest novel, Solar, tells the story of Michael Beard, a Nobel Prize-winning physicist who expanded on an aspect of Einstein’s Theory of Relativity. Beard coasts on his past glory, and now seems only interested in the pleasures his reputation can bring him. Patrice, his fifth wife, has discovered an affair, and Michael experiences severe regret and tries everything to mend his marriage. He returns home early from a conference to discover his post-doctoral student assistant naked in a dressing gown Patrice had given Michael for his birthday. Michael’s life becomes as dense and entangled as the theories and calculations that made his reputation.

As in all his novels, McEwan mires his characters in contemporary problems and difficulties. Otherwise intelligent people seem bewildered when faced with moral and ethical choices. When Michael receives a possible solution to the problem of global warming from a deceased colleague, he decides to pursue this idea alone, and gathers funding from numerous sources in the U.S. 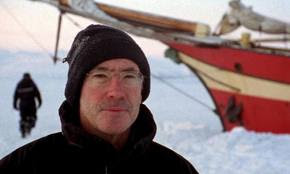 As I approached DFW airport the other day, I silently hoped for one or two more turns circling the airport so I could finish the last 18 pages – McEwan’s prose is that good. What I like most about McEwan’s novels are the tiny fire crackers he plants along the way, which turn out to be bombs that flare unexpectedly. Finding these seemingly offhand remarks becomes a game I relish when reading his work. For example, when Beard takes off from England for a conference near the Arctic Circle to study melting glaciers, he looks out the window of the plane. McEwan writes,

“Here was a commonplace sight that would have astounded Newton or Dickens. He was gazing east, through a great rim of ginger grime – it could have been detached from an unwashed bathtub and suspended in the air. He was looking past the City, down the bulging widening Thames, past oil and gas storage tanks toward the brown flatlands of Kent and Essex and the scene of his childhood and the outsized hospital where his mother had died, not long after she told him of her secret life, and beyond, the open jaw of the tidal estuary and the North Sea, an unwrinkled nursery blue in the February sunshine. Then his gaze was rotated southward through a silvery haze over the Weald of Sussex toward the soft line of the South Downs, whose gentle folds once cradled his raucous first marriage, a synesthesia of misguided love, infant excrement and wailing of their lodgers’ twins, and the heady quantum calculations that led, fifteen years and two divorces later, to his prize. His prize which half blessed, half ruined his life. (107-108)

McEwan’s lovely prose hides a secret, and as I circled DFW, too absorbed to look out the window, I turned the last page, and the “commonplace” exploded into a tragic-comic ending, which left me looking forward to McEwan’s next novel. 5 stars