A Visit from the Goon Squad by Jennifer Egan

If someone set out to write a book that would frustrate all believers in the “Rule of 50,” this book would win the prize. A friend recommended this book, and she has a good track record with me, so I decided to read it. I struggled past the first fifty pages with characters I did not like, and a story line I had difficulty following because of all the bungie jumps through time. Only occasionally did a clue appear hinting at a time shift.

Another annoying habit of Egan’s involved her suddenly telling the reader what would happen to a character in the next 20 or 30 years. She often dropped these as an afterthought at the end of a chapter.

Egan wrote one chapter entirely in second person. A cheap trick and a tired gimmick, if you ask me. Chapter 12 took the form of a power point with flow charts and pie graphs. Like the form in its usual incarnations in business meetings, this chapter had “No power and no point.” I could not even begin to tell you what ideas this chapter tried to convey. All I got out of it was a well-scratched head. 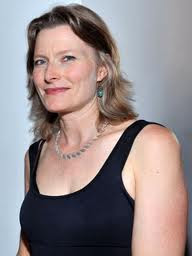 The characters who populate this story had not one ounce of charisma – except for a few women characters drooled over by some of the men. Second-hand charisma is phony.

A Pulitzer Prize? Give me a break. A Visit from the Goon Squad doesn’t even come close to any book awarded the Booker Prize.

This novel is gimmicky and not worth the read. 1 star