In my younger days, I read all the science fiction and fantasy novels I could get my hands on. Arthur C. Clarke’s A Fall of Moondust and the epic fantasy, The Chronicles of Thomas Covenant the Unbeliever, among others, remain favorites. Now, I have returned to those days with the magical, mysterious Night Circus by Erin Morgenstern.


Celia is the daughter of the great illusionist, Hector Bowen. Marco is the student of a competing illusionist, known only as “the man in the grey suit.” These two magicians have been challenging each other to a rather peculiar duel. Each trains an apprentice, a venue is selected, and the two students are bound together by mysterious silver ring. Neither knows the identity of the opponent, and in fact they know almost nothing of the rules of the contest. But this contest is to the death. This might sound rather ominous, but it is not, because Celia and Marco do not know what the other is doing at the Night Circus. Eventually, they are able to figure out the identity of the other, and that poses some interesting complications for the challenge.

The venue of the challenge is the Night Circus. Morgenstern writes,

“The circus arrives without warning. No announcements precede it, no paper notices on downtown posts and billboards, no mention or advertisements in local newspapers. It is simply there, when yesterday it was not. But it is not open for business. Not just yet. A black sign painted in white letters hangs upon the gates, [it] reads Opens at Nightfall Closes at Dawn. ‘What kind of circus is only open at night?’ people ask. No one has a proper answer, yet as dusk approaches there is a substantial crowd of spectators gathering outside the gates” (3-4). The circus appears all over Europe, Turkey, and even in numerous locales in North America and East Asia.

This mysterious tale slowly resolves into a love story. I am sure my faithful listeners can guess the names of the love birds, and they would be right. But this story is larger than the sum of its parts. The web ensnaring all of the characters gradually takes the shape and form of the circus itself. And that does not even begin to hint at some of the marvelous and wonderful details Morgenstern has written into this story. 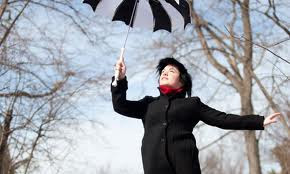 Marco performs incredible feats of illusion in and around the circus, and Celia is a performer. On one occasion, at a “midnight dinner” at the home of M. Lefèvre, a sort of agent/manager for the circus, Celia wears a gown which changes colors and patterns to match the dress of whoever stands alongside her. No more hints, I do not want to spoil any of the surprises. Readers who love magic, mystery, and love will really enjoy the story of Celia and Marco.

Night Circus is Morgenstern’s first novel, but I sensed great possibilities for a sequel in the final pages. I sure hope so! 5 stars.