As we pass another vernal equinox in March of 2013, my mind wandered back to 1965 when I read Rachel Carson’s Silent Spring. This classic work, which became, in the words of Peter Matthiessen, “The cornerstone of the new environmentalism” has writing as beautiful as a perfect Spring day.

Carson was born in 1907 and served many years as a marine biologist with the U.S. Fish and Wildlife Service. Three previous works on the environment of the oceans firmly fixed her as an eminent writer on nature. She died less than two years after the publication of Silent Spring. Her work set in motion profound changes in environmental laws to protect the air we breathe, the water we drink, and the land on which we live and grow our food.

Carson’s study focuses on the indiscriminate use of the pesticide DDT, which was banned shortly after the book caused a world-wide sensation. Predictably, much opposition arose from opponents of the idea we need to protect our environment. Detractors in government and the then multi-million dollar chemical industry attacked Carson, because – as Linda Lear who wrote a biography of Carson wrote in the Introduction to my anniversary edition – they “were not about to allow a former government editor, a female scientist without a Ph.D. or an institutional affiliation, known only for her lyrical books on the sea, to undermine public confidence in its products or to question its integrity” (xvii). Those chemical companies now have profits in the billions. Lear continues, when this book “caught the attention of President Kennedy, federal and state investigations were launched into the validity of Carson’s claims” (xvii).

The chapters then focus on various parts of the environment, the chemicals which were sprayed or dumped into each one, and the effects these chemicals had. The title “Silent Spring” reflects numerous reports of the death of thousands of song birds and other creatures following widespread use of DDT and other pesticides. I remember as a child watching trucks drive down our street spraying a white fog to kill mosquitoes. Sometimes the city issued warnings and other times not. My mother always made my sisters and me stay inside “until the smell went away.” However, I remember seeing children running and playing in the fog. 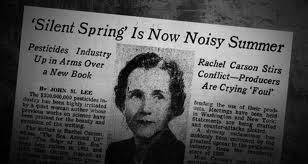 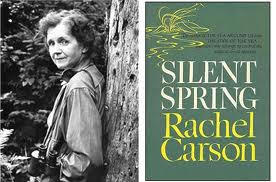 Carson writes about the hundreds of new chemicals which find their way into use every year. In the mid-40s alone “over 200 chemicals were invented to kill insects, weeds, rodents, and other organisms described in the modern vernacular as ‘pests’” (7). Carson asks, “Can anyone believe it is possible to lay down such a barrage of poisons on the surface of the earth without making it unfit for all life? They should not be called ‘insecticides,’ but ‘biocides’” (8). Yet today, attacks continue on the EPA. Silent Spring is a most worthy read for anyone concerned about the environment. 5 stars

Hmm, good job! This is really something!