The Centaur by John Updike

As far back as about 4th grade, I have loved writing stories. I never received much encouragement from the teachers until I reached high school. William A. Votto, Jr. was my junior year English teacher. He liked an essay I wrote about a football game kick off, and he encouraged me to write. I spent numerous afternoons talking with him about reading and writing. He became the first person to plant the idea that reading and writing as closely bound together. Bill Votto also introduced me to The New Yorker magazine. I stopped at a news stand on the way home that day and bought the latest issue. It had a story by John Updike. I immediately fell in love with Updike’s masterful use of the English language.

Updike became my favorite writer. He was also the first writer I began gathering as many of his writings as I could. Today, my personal library has well over 340 books by and about John Updike. I was also lucky enough to meet him on several occasions. I even attended a writer’s conference in Boston one year and heard him speak. March 18th would have been his 81st birthday. He died in January 2009. 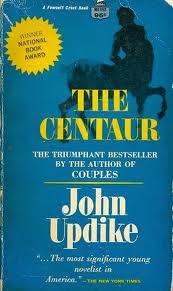 Of all his books, The Centaur is my absolute favorite. In fact it securely holds first place at the top of my favorite novels list. I once told him about this choice for his best work, and he said, “Well, it’s my favorite, too. It is the warmest story I ever wrote.” In 1964, it won the National Book Award for fiction.

The Centaur tells the story of George Caldwell, science teacher at Olinger High School. The fictional town of Olinger is the setting for one of his numerous collections of stories. Interwoven with the story of George and his brilliant son, Peter, is the myth of the centaur, Chiron, the teacher of Achilles. Peter plays the role of Prometheus. In the myth, Chiron is wounded, but since he is immortal, he must suffer for all eternity the pain of his wound. He gives up his life for Prometheus.

For a sample of Updike’s power with words, I turned to a random page and began reading,

“My father and I scraped together the change in our pockets and found enough for breakfast at a diner. I had one dollar in my wallet but did not tell him, intending it to be a surprise when things got more desperate. The counter of the diner was lined with workmen soft-eyed and gruff from behind half-asleep still. […] I ordered pancakes and bacon and it was the best breakfast I had had in months. My father ordered Wheaties, mushed the cereal into the milk, ate a few bites, and pushed it away. He looked at the clock. It said 7:25. He bit back a belch; his face whitened and the skin under his eyes seemed to sink against the socket bone. He saw me studying him in alarm and said, ‘I know. I look like the devil. I’ll shave in the boiler room over at the school, Heller has a razor.’ The pale grizzle, like a morning’s frost, of a day-old beard covered his cheeks and chin” (169).

If you have never read Updike, pick a genre – poetry, novels, short stories, or essays on art, books, writers, and philosophy. You will not be disappointed. 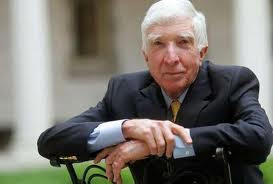