The Dog Stars by Peter Heller


A good friend recommended The Dog Stars by Peter Heller for my book club.  At first, I thought, Oh, no, another apocalyptic, dystopian novel!  But I am a loyal member of the club, so I decided to plow through to the end.  Then I faced another obstacle.  A peculiar style – sentence fragments, and something like a focused stream of consciousness.  In other words, the narrator jots down words and phrases to tell the story of an earth devastated by an outbreak of flu closely followed by a mysterious blood disease, which killed millions.  But I stayed with it, and as I became accustomed to the style, I found the story so absorbing, I could barely put it down. 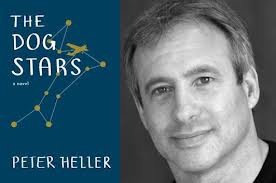 Hig is a pilot, and he flies “The Beast” -- an old Cessna manufactured in the 1950s.  He lives near an airport with supplies of aviation fuel, tools, and parts to keep The Beast flying an 8-mile radius around the perimeter looking for wandering bands of survivors.  He takes these trips with his beloved companion, Jasper.  Hig has a soft spot for a family of Mennonites who live a few miles away.  The family is infected with “The Blood,” and when Hig visits to give them some food and medical supplies, he stays 15 feet away and never touches any of the children.

He shares this airport residence with Bangley, who has a military mindset and an impressive collection of weapons – both small and large.  He is justly paranoid, and encounters with wanderers turn deadly.  He tries to convince Hig to be more aggressive when wanderers appear, and he also has a slightly distrustful eye always on Hig.

I can’t say much more without giving away the twists in the plot and the suspenseful flight Hig takes to track down a mysterious signal he receives from an airport just at the edge of The Beast’s range.

My friend provided a series of questions as launching points for discussion.  One interesting question involved the significance of the title.  No one came up with a plausible idea, but it occurred to me that perhaps the word “stars” in the title is not a noun but a verb.  I won’t go any further with this thought, because I do not want to give any of the plot away.

The Dog Stars is my first encounter with Peter Heller and his first novel.  He has also written non-fiction works on surfing, whales, and travelogues on China and Tibet.  I rarely read this kind of non-fiction, but Heller has made me travel-curious.  5 stars