The Land of Green Plums by Herta Müller

Herta Müller won the Nobel Prize for literature in 2009.  The Land of Green Plums, the second of her books I have read, is set in Romania during the dictatorship of Nicolae Ceauşescu.    It tells the story of four friends trying to survive under a brutal dictatorship.  Edgar, Kurt, and Georg are all friends of the unnamed female narrator.  Lola is one of her “cube mates.”

Müller describes the living conditions, “A little cube of a room, one window, six girls, six beds, under each a suitcase.  Next to the door, a closet built into the wall; in the ceiling over the door, a loudspeaker.  The workers’ choruses sang from the ceiling to the wall, from the wall to the beds, until night fell.  Then they grew quiet, like the street below the window and the scruffy park, which no one walked through anymore.  There were forty identical cubes in each dormitory” (4-5).  Müller’s style perfectly conveys the oppressive conditions forced upon these students by the regime.

The characters all leave strands of hair on their suitcases and in their books, so they know when – not if – the secret police have searched the room.  The four friends develop elaborate plans to hide their journals, which include rants against the regime and – the most threatening writings of all – poetry.

I often hear the words tyrant, dictator, oppressor, secret police tossed around like bread crumbs in a yard full of birds, but I find it hard to understand how people live and die under such brutal governments.  Reading Müller’s work has opened a window for me on the realities many millions struggle under every day.  This novel made me more aware of the freedoms we enjoy.  I won’t take them for granted.  Yet, even in a free society, we see encroachments from all sorts of individuals and government agencies.  Facebook and Twitter have opened the books of our lives for anyone with a computer to dig through.  And we do this freely and willingly, and even with a nonchalance that sometimes disturbs me.

While discussing communication among the four friends, Müller writes, 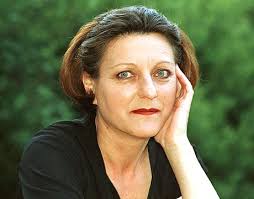 “‘When you write, don’t forget to put the date, and always put a hair with the letter,’ said Edgar.  ‘If there isn’t one, we’ll know the letter’s been opened.’” // Single hairs, I thought to myself, crisscrossing the country on trains.  A dark hair of Edgar’s, a light one of mine.  A red one of Kurt or of Georg.  They were both called Goldilocks by the students.  “‘The word nail-clipper in a sentence will mean interrogation,’ said Kurt, ‘shoes will mean a search, a sentence about having a cold will mean you’re being followed.  After the greeting always an exclamation point, but a comma if your life’s in danger’ (81).

This tense style really gave me the willies.  Herta Müller’s The Land of Green Plums will stir up the imagination and make the reader knit the brow attempting to understand what can make a regime descend into this pit of hell dragging its citizens down with it.  5 stars