Animals Make Us Human: Creating the Best Life for Animals by Temple Grandin

One of the most amazing stories I have heard over the last number of years is that of Temple Grandin.  As a child, she did not speak until she was four.  Doctor’s correctly diagnosed her as being autistic, but they incorrectly attributed the condition to lack of maternal care as an infant.  Temple proved to be a brilliant student who saw things as pictures in her head.

Our book club read Grandin’s Animals Make Us Human, so I watched again the film starring Clare Danes as Temple.  Temple’s mother is exhausted from dealing with the child, and her sister, who lives in Phoenix, agrees to take Grandin for the summer.  This experience on a cattle ranch helped shape the rest of her life.

Temple had the ability to see the cattle in motion, and she then deduced that controlling the flow of cattle -- in a more natural way – would calm them and reduce the number of animals killed or injured.  Of course, she met a great deal of resistance from cattlemen.  In the end, her persistence won out, and she has designed cattle chutes all of the U.S.

In Animals Make Us Human, she describes how individual groups of animals act – and react – to interaction with humans.  As the proud parent of a new puppy, I gained new insights on dealing with a rambunctious 8-week old Labrador Retriever.  Her section on cats was also interesting, and has helped me understand the two felines who allow us to live in their home.

While I know little about horses, that section also was extremely interesting.  I always wondered why zebras were never domesticated, and Temple handles that explanation as well.

Additional chapters on cows, pigs, chickens and wildlife fascinated me to no end.  I have always liked zoos, and her chapter on those venerable institutions was amazing.  Her studies showed that zoo animals had nothing to do all day but pace and walk in circles.  She recounts the tragic story of an elephant at the Phoenix Zoo.  The animal was chained in one spot and could do nothing but sway back and forth.  In another instance, antelopes could not be calmly moved, because a yellow sign had been carelessly left on the ground.  The color yellow frightened the antelopes. 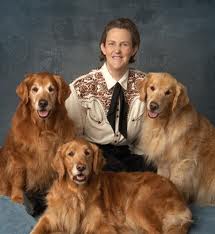 For anyone interested in animals, this book offers a world of enlightenment.  Temple’s style tends toward simple explanations, and sometimes her enthusiasm leaps right off the page.  For example, she writes:

“I strongly suggest that if you’re going to be away a lot, or can’t pay an hour’s worth of attention to your dog every day, you should consider getting two dogs.  A lot of people think having two dogs is more fun than having just one anyway, and watching dogs play is a blast” (43).  I can attest to the full truth of this statement.  I have never seen anything in pets more fascinating than the interaction of two dogs.
I highly recommend this book for all pet owners -- or anyone who cares about animals at all.  5 stars