The Hanging Garden by Patrick White

A few years ago, an article in The (London) Times Literary Supplement mentioned White as one of the great, almost-forgotten writers of the 20th century.  His sweeping stories of the wild lands of the Outback sounded like the kind of character-rich stories I love so much.

My first read was The Aunt's Story, a novel told in three parts. The first and third are from the viewpoint of an omniscient narrator, and the second is through the eyes of the title Aunt, Theodora Goodman.  Now fully intrigued, I moved onto Voss, the story of Laura Trevelyan and the society she inhabits in 1845 Sydney, Australia and Ulrich Voss, who leads an expedition to cross the Australian outback with a few horses, some cattle, sheep, and goats.  He gathers a disparate variety of individuals on this quasi-scientific expedition.  I then read Flaws in the Glass: A Self Portrait, which detailed White’s interesting life including a stint as an intelligence officer during World War II.

Recently, an article in The New York Times mentioned a fragment of a novel previously unpublished.  In an extensive afterword, David Marr documents the provenance of the manuscript with letters from White.  Apparently, The Hanging Garden is part one of a three part novel White was working on at the time of his death in September of 1990.

Eirene Sklavos is the daughter of an Australian woman and a Greek Patriot killed in the early days of World War II.  Her mother wants to return to Greece to work as a nurse.  She delivers Eirene to the home of an Englishwoman in London, who will send her onto Australia for the duration of the war.  Gil Horsfall has lost his parents in the London blitz, and he, too is headed to Australia.  The young children end up in the same home together. 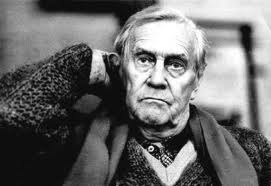 Besides the characters drawn in great detail, I admire White’s lyrical prose.  He describes young Gill pondering his future as he prepares to pitch his last stone into the water.  White writes, “As afternoon faded, long brassy fingers of light extended from the direction of the city.  They reached out at him, but fell short, distorted by ripples in mauve-green water inserting themselves in cracks of the gull-scrabbled sea wall.  A gull on the long slow curve of its flight let fall a squeeze of white almost like toothpaste on the pale hair.  By now so dazed by sun, air, dreaming, he barely bothered” (6).

Most of White’s novels are long, detailed and full of characters as tough as the Australian Outback.  Part one of the novel is a mere 215 pages, so I presume the final product would reach 600 pages -- a much more typical length for White.

I wonder if this part was really finished, since it includes some peculiar shifts in point of view.  I felt as if White was leaving himself notes for parts of the story which needed some final touches.  Nevertheless, The Handing Garden is a wonderful introduction to Patrick White.  5 stars.