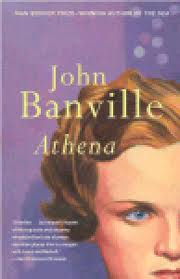 We have all had experiences of entering a dream-like state.  We wander and take in the scenery and the people, while we think about the day behind and the day ahead.  The state seems vivid, but it also seems strangely “other.”  I frequently have these while taking my early morning walks, and suddenly, I am on the last leg of the route home.  This matched exactly the sensation I felt when reading John Banville’s 1995 novel, Athena.

Banville won the Booker Prize in 2005 for his novel The Sea.  I collect this outstanding series of novels, and I first encountered Banville while working my way through the 46 winners of the prize first awarded in 1969.

Mr. Morrow seems a lost soul.  He has a mysterious past involving the police, prison, and some artwork.  His Aunt Corky is at death’s door – and has been for a few years.  He reluctantly visits her from time to time.  A shady character approaches him and asks him to examine some paintings and determine whether or not they are genuine.  He also meets a beautiful young woman and begins a rather torrid affair.  In fact he begins to obsess over this woman, and visits her at every opportunity.  In the backdrop of this novel are a series of brutal murders in London, and some other mysterious characters that seem to follow Morrow.

Banville describes one visit to his aunt in hospital:

“The bed, the chair, the little table, the lino[leum] on the floor, how sad it all seemed suddenly, I don’t know why, I mean why at just that moment.  I rose and walked to the window and looked down over the tilted lawn to the sea far below.  A freshening wind was smacking the smoke-blue water, leaving great slow-moving prints, like the whorls of a burnisher’s rag on metal.  Behind me Aunt Corky was talking of the summer coming on and how much she was looking forward to getting out and about.  I had not the heart to remind her that it was September” (30-31). 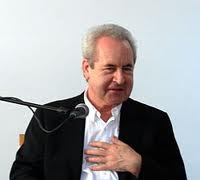 The seven paintings Morrow is asked to authenticate are described and all seem to involve mythological creatures chasing women.  Each chapter after the first, begins with a short essay on one of the paintings, and these essays gradually devolve into self-reflections by Morrow on the connection between the figures in the painting and his lover.

The more of Banville I read the more convinced I become that he is a great Irish writer and deserves a place at the table with Joyce, Becket, Shaw, and Wilde.  Athena is rated R for a few explicit scenes and some mild violence, but it is an absorbing and enchanting thriller/love story.  5 stars