In an exquisitely happy coincidence, I recently purchased Dear Life by Alice Munro, who won the 2013 Nobel Prize for Literature.  A representative of the Swedish Academy praised Alice Munro’s “talent in capturing different moods of people, making her a ‘fantastic portrayer of human beings’."  This collection of stories draws a vivid picture of the lives of ordinary people, faced with mundane situations, which they handle with grace and aplomb.

Munro is the 12th woman to win the prize.  Some of the noted writers who have taken this most prestigious award include, Earnest Hemingway, William Faulkner, John Steinbeck, Saul Bellow, Toni Morrison, and Doris Lessing.  Reading at least one work by each winner makes an interesting and wide-ranging adventure in fiction.

When I first started reading this collection, I felt a little mystified by the ordinariness of the lives she portrayed.  But once I really immersed myself in the stories, I began to see the importance that all lives
have in teaching us about the inner workings of the human mind.

In “Amundsen,” Vivien Hyde has arrived at a school as a new teacher.  She is self-conscious about a minor physical deformity and spends most of her time home alone.  But she attracts the attention of the headmaster, Dr. Fox, who invites her to his home for dinner.  The two gradually develop a bond and he asks Vivien to marry him.  They elope, and when they arrive at their destination, Fox says, “I can’t do it,” … ‘He can’t explain it.  Only that it is a mistake.”  He puts her on a train for home with these words, “Maybe someday you’ll count this as one of the luckiest days of your life.” (63)

Vivien runs into him years later, and he asks if she is happy.  Munro continues, “’Good for you.’  It still seemed as if we could make our way out of that crowd, that in a moment we would be together.  But just as certain that we would carry on in the way we were going.  And so we did.  No breathless cry, no hand on my shoulder when I reached the sidewalk.  Just that flash I had seen in an instant,” … “For me, I was feeling something the same as when I left Amundsen, the train carrying me still dazed and full of disbelief.  Nothing changes really about love.”  Munro gives the reader powerless, helpless characters who carry on their lives with quiet dignity.

Yet, somehow, I find these stories anything but depressing.  I find myself cheering for these men and women, hoping beyond hope they will succeed and triumph in the end. 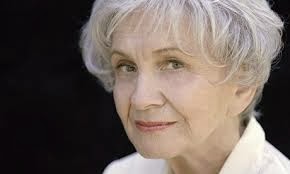 I found some passages of Alice Munro’s Dear Life rather confusing, and only after several attempts could I untangle the relationships and emotions of these characters.  One story in particular, “Gravel,” is narrated by a young girl who suffers the loss of a sibling who drowned while attempting to save the family dog.  The conversations between her older sister, Caro, and her step-father Neal required a lot of extra effort.  Overall, Munro is a wonderful writer with lots of interesting characters and a fine narrative eye.  4 stars