A Child’s Christmas in Wales by Dylan Thomas 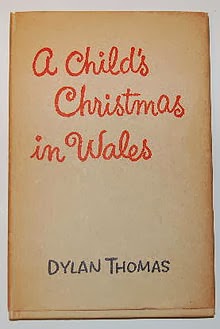 On December 17th of 1843, Charles Dickens published his iconic holiday tale, A Christmas Carol.  Everyone is familiar with the details and characters: Scrooge, Marley, Tiny Tim, and the visits of the three ghosts, Christmases Past, Present, and “Yet to Come.”  The initial printing of 6,000 copies sold out in a few days and has been popular ever since.  Dickens received credit for helping revive interest in old Christmas customs, including Christmas trees and the recently introduced Christmas cards.  However, another tale hovers around the edges of Christmas reading – “A Child’s Christmas in Wales” by Dylan Thomas.  This prose work, originally written for radio, was recorded by Thomas in 1952.  It takes a nostalgic view of Christmas from an earlier, simpler time.

Thomas was born in Swansea, Wales in 1914, and dropped out of school at 16.  He first worked as a journalist, but his poem, "Light Breaks Where No Sun Shines" in 1934, laid the foundation for his literary reputation.  Thomas and his family lived hand-to-mouth in the Welsh fishing village of Laugharne.  He found it difficult to earn a living as a writer, so he turned to radio and speaking and reading tours.  “A Child’s Christmas in Wales” became his most popular work, along with the poem, “Do Not Go Gentle into That Good Night.”  Thomas’ Christmas tale is warm and pleasing to the mind.  He begins the story like this,

“One Christmas was so much like another, in those years around the sea-town corner now […] out of all sound except the distant speaking of the voices I sometimes hear a moment before sleep, that I can never remember whether it snowed for six days and six nights when I was twelve, or whether it snowed for twelve days and twelve nights when I was six” (296). 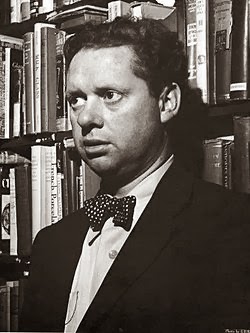 Thomas then begins his nostalgic recollections, “Years and years ago, when I was a boy, when there were wolves in Wales, and birds the colour of red-flannel petticoats whisked past the harp-shaped hills, when we sang and wallowed all night and day in caves that smelt like Sunday afternoons in damp front farmhouse parlours, [… and while…] we rode the daft and happy hills bareback, it snowed and it snowed.  But here a small boy says: ‘It snowed last year, too.  I made a snowman and my brother knocked it down, and I knocked my brother down, and then we had tea’.” (297-298).

He continues, “For dinner, we had turkey and blazing pudding, and after dinner the Uncles sat in front of the fire, loosened all buttons, put their large, moist hands over their watch chains, groaned a little, and slept.  Mothers, aunts and sisters scuttled to and fro” (301).

Sure sounds like many of my childhood Christmas memories at my grandparent’s home.  Start a new tradition and read Dickens and Thomas’ “A Child’s Christmas in Wales” around the tree on Christmas Eve.  5 stars