In 2010, I reviewed the year’s Pulitzer Prize winning novel, Tinkers by Paul Harding.  For some odd reason, I do not usually follow the Pulitzer, but a friend recommended the book, and I did end up enjoying it very much.  Tinkers tell the story of the last days of George Crosby, a clockmaker.  The psychological insights were profound and really held my attention on every page.  The novel turned out not at all morbid or depressing.  Now, the waning days of 2013 has brought me Harding’s sequel of sorts, Enon, which tells the story of Charles Crosby, George’s grandson.  Harding sprinkles flashbacks to Charles’ adventures with George, and the lessons he learned from him.

Charles and Susan are married with a 13 year-old daughter, Kate.  Charles never finished college, and works as a handyman, landscaper, and painter.  Susan hales from Minnesota of solid Finnish roots.  Harding writes of Susan’s family, “They were always affectionate toward me, but I was certain they were disappointed that their daughter had taken up with me” (13).

Harding opens the novel with dreadful news, “Most men in my family make widows of their wives and orphans of their children.  I am the exception.  My only child, Kate, was struck and killed by a car while riding her bicycle home from the beach one afternoon in September, a year ago.  She was thirteen.  My wife, Susan, and I separated soon afterward” (3).

I have heard many people say the worst thing any parent can experience is the loss of a child.  I have a son, and I cannot imagine the utter anguish and devastation I would feel if something happened to him.  This novel opens a window on that terrible world, but – spoiler alert – Enon has a reasonably good ending, which I found most satisfying.  All along, I expected the worst to happen to Charles as he spiraled out of control after Susan moved back to her parents’ home.

Before the birth of Kate, the marriage was on the thinnest of ice, but Harding writes, “When Kate was finally born and Susan saw her for the first time, the faraway look in her eyes vanished. […] Kate bound us back together.  Or really, we were each separately fully bound to Kate and thereby to each other through our single, cherished daughter, and that was fine by us.  After all, we did have a sort of real love for one another, or I did for Susan and she had a deep affection for me” (29).

But Kate’s death snapped these tenuous bonds, and Charles was left alone.  He breaks his hand and becomes addicted to painkillers, and sinks further into drug and alcohol abuse.  However, a chance encounter with a friend of Kate’s while contemplating suicide, turns his entire life around.

I never wanted to stop reading this novel.  I kept pulling for Charles.  I wanted to help rescue him.  Harding’s prose constantly reverts to the theme of loss, and in the end, we all realize loss is inevitable -- along with grief and suffering.  Charles overcame his grief, and the novel ends with him well along the road to recovery. 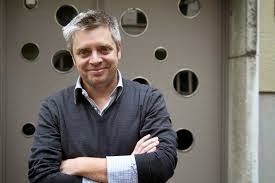 In one poignant scene, Charles and Kate – on one of their many walks in the woods -- searched for an old cabin from Charles’ childhood.  Harding writes, “‘There was an old cabin here when I was a kid, Kate,’ I whispered out loud, still scratching a little at the underbrush with my foot, half-looking for a threshold.  ‘But it’s gone, just disappeared, like it never even existed.’  I turned back to the path and resumed walking” (45).

Unlike the cabin, Charles will never forget Kate.  Even at his worst, the memory of Kate keeps surfacing.  That is what held Charles together and enabled him to get to the point of beginning his acceptance and recovery.  Enon by Paul Harding is an amazing tale of a most difficult subject told with sympathy and grace. 5 stars