"The Lady with the Dog" by Anton Chekhov

Anton Chekhov was born January 17, 1860 in Taganrog, Ukraine.  Chekhov studied medicine, and he began writing sketches for newspapers to pay his tuition.  This profession brought him into contact with peasants, the nobility, and his peers.  These experiences informed all his work.  In 1892, he gave up medicine and devoted himself full time to writing.  In 1901, Chekhov married Olga Knipper, who had performed in his plays.  Unfortunately for Olga, Chekhov died on July 15, 1904, the day his masterpiece for the theater, The Cherry Orchard, opened.  He is buried in Moscow.

He brought theater into the 20th century by focusing on the declining fortunes of the bourgeoisie, with the revolution of 1917 just around the corner.  His plays remain popular, and theater-goers can frequently find one of his plays performed from Broadway and London’s West End, to the tiniest community theater.

But many writers and readers also consider Chekhov one of the great masters of the short story.  He wrote hundreds in his life time – some of them in under an hour.  My set of the complete stories runs to over 1300 pages.  The crowning jewel of this set is “The Lady with the Dog” written in 1897.  He set the story in Yalta, where he was recovering from an illness.  I have read this story countless times, and it never fails to move me.

Chekhov wrote, “Dmitri Gurov, who had been a fortnight at Yalta, […] had begun to take an interest in new arrivals.  Sitting in Verney’s pavilion, he saw, walking on the sea-front, a fair-haired young lady of medium height, wearing a beret; a white Pomeranian dog was running behind her.”  //  And afterwards he met her in the public gardens and in the square several times a day. […] no one knew who she was, and everyone called her simply “the lady with the dog.”  (323). 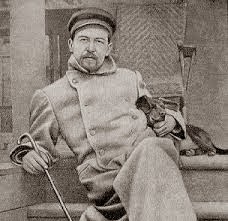 Unfortunately, Gurov and Anna, both have spouses and difficult relationships with them.  Gurov “did not like to be at home.”  He considered women, “the lower race,” despite the fact “he could not get on for two days together without [them].”  (323)  Anna has serious misgivings about the relationship, but they begin an affair.  “In another month, he fancied, the image of Anna would be shrouded in a mist in his memory.”  (330)  Sadly, this did not occur.  Chekhov writes, “Anna [...] did not visit him in his dreams, but followed him about everywhere like a shadow and haunted him.  When he shut his eyes he saw her as though she were living before him, and she seemed to him lovelier, younger, more tender than she was; […] In the evenings she peeped out at him from the bookcase, from the fireplace, from the corner – he heard her breathing, the caressing rustle of her dress.  In the street he watched the women, looking for someone like her.”  (331)

This romantic and touching story of two people who meet and discover they are soul mates never grows old for me.  Try Chekhov – virtually every anthology contains the splendid story, “The Lady with the Dog.”  5 stars
Posted by Chiron at 3:59 PM