In Paradise by Peter Matthiessen

Peter Matthiessen, who is one of my favorite non-fiction writers, died this year on April 5 four days after the publication of his final novel.  In Paradise is a peculiar story.  It has the intensity of a work by an investigative journalist, with the compelling beauty of a wonderfully written novel.

Clements Olin is an American scholar of Polish descent.  He travels to Poland to attempt to discover the identity of his mother.  He arrives to participate in a week-long retreat at Auschwitz.  Along with about 100 others, they pray, meditate, and eat and live in the quarters occupied by the German military officers in charge of the camp.

One of the most interesting aspects of the story is the eclectic group of people on this retreat.  There are devout Jews and Christians, Catholic nuns and monks, a defrocked priest, atheists and believers, Germans, Poles, American, English, and French citizens.  As the week progresses, emotions bubble to the surface, and things collapse into near chaos.

Even Olin questions his right to be there, as well as his purpose as a participant.  He is not Jewish, and has no apparent connection to the Holocaust.  He has a faded picture of a woman waving out a window, whom he believes to be his mother.  The woman lived in the town near the camp.  He tries to locate the house in the picture, but the townspeople are suspicious, and Olin fears violence.

In his inimitable style, Matthiessen describes the landscape, “The road follows the Vistula upriver westward across the frozen landscape; blue-gray hills of the Tatra Mountains and Slovakia rise in the south.  Here and there along the way stand stone houses with steep roofs to shed the snows, most of them guarded by spiked iron fences (wolves and brigands?).  These dwellings crowd the road in seeming dread of those dark ranks of evergreens that march down the white faces of the hills beyond like Prussian regiments (or Austro-Hungarian or Russian) crossing some hinterland of Bloody Poland, which has no natural boundaries against invaders” (14).

Like the landscape, In Paradise has no natural boundaries.  People are pulled in from all over the world, and most are repulsed by the physical remnants of that unspeakable horror.  I found the narrative somewhat disturbing. 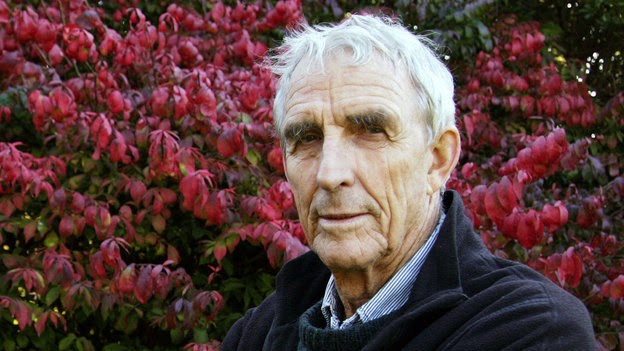 Despite the negative aspects of the story, it was profoundly absorbing.  The characters, who spoke up during the retreat, revealed individual reasons for coming to Auschwitz.  Matthiessen held my attention to the last word.  I had already seen and heard these stories many times, but Matthiessen put a new face on the evil.  He showed how the experience changed the characters – most prominently, Clements Olin himself.  If you have never read any literature of the holocaust, In Paradise represents a new look at a story that cannot, must not ever be forgotten.  5 stars