Hunger Makes Me a Modern Girl by Carrie Brownstein

At one time, I devoured biographies and memoirs of my favorite actors.  Katherine Hepburn, and Elizabeth Taylor – to name two – seemed to me Hollywood royalty, and I loved them all.  Then I stumbled on a few others, and began to notice a pattern I did not appreciate.  I abandoned those books for years.  I hesitated a little bit, when I saw the release of a memoir by Carrie Brownstein.  In the event you might not be familiar with Carrie, she is the co-star of Portlandia, a clever, avant-garde comedy on the Independent film channel.  Hunger Makes Me a Modern Girl reveals her as so much more than the strange characters she plays on the TV show.  Carrie also wrote several books about food and visiting Portland, Oregon

Carrie is also an avid musician, who struggled for many years to form a rock band, and finally succeeded with Sleater-Kinney, her band from 1994 to 2006.  The memoir is a wonderfully written, honest, and thorough review of her struggles to fulfill a dream she had from early childhood.  She never missed an opportunity to entertain family and friends.  Her mother was hospitalized as a result of an eating disorder, and the book opens with Carrie and her sister dealing with her absence.  When Carrie was about 20 years old, her father helped finance a trip to Australia to make a record with a musician the band had discovered on the internet.  If you have never seen Portlandia, you have missed a treat.  The humor involves bizarre, eclectic, and a very funny group of characters, who live and work in Portland.  Her co-star is Fred Armisen, and the two play most of the characters with changes of costume, makeup, and wigs. 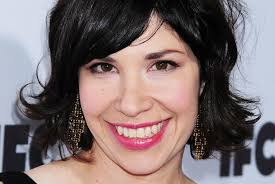 The memoir itself is unlike many of the other show-biz bios I have read.  Carrie seems forthright and thorough in her examination of her life, family, and career.  She writes, “There is something freeing in seeing yourself in a new context.  People have no preconceived notion of who you are, and there is a relief in knowing that you can recreate yourself.  When you’re entrenched in a community of people who know you, it’s scary to proclaim wanting to be different and wanting to experiment.  We went to the other side of the world to make our own sound.  Usually this is a methodology you employ as a restart later in your career.  We did it right up front.  We traveled to a foreign country for our first record.  We had to uproot ourselves, not because we were deep into career ruts, or didn’t want to give credit to the places we had come from, but because we had no desire to sound like or emulate anything that had come before” (96).

Carrie continues, “It was an extreme way to start, but I learned later on how hard it can become to unsettle yourself, to trip yourself up, and I think that’s a good place to write from.  It’s important to undermine yourself and create a level of difficulty so the work doesn’t come too easily. […] The stakes should always feel high” (96).

Although she is talking about a rock band, I believe this idea can apply to nearly any creative endeavor.  I must admit I am not a fan of punk nor of indie music, but I do love Portlandia and Carrie Brownstein’s Memoir, Hunger Makes Me a Modern Girl.  5 Stars