Twice short-listed for a Booker Prize, David Lodge, a British author has a novel in a sub-genre I really enjoy – novels set in Academia.  His 2008 novel, Deaf Sentence, is a darkly comic tale of Professor Desmond Bates and his wife Fred, who is a partner in a home décor and design business.

Professor Bates headed the linguistics department at a university.  He began losing his hearing, and when he was offered an early retirement he took it.  Fortunately, his wife had partnered with a friend in the opening of her business, and as he retired, the business picked up, and the couple had a healthy income.  He also cares for his elderly father, whom he visits once a week to spend the day.

Desmond occasionally regrets his retirement.  Lodge Writes, “At first it was very enjoyable, like a long sabbatical, but after eighteen months or so his freedom from routine tasks and duties began to pall.  He missed the calendar of the academic year which had given his life a shape for such a long time, its passage marked by reassuringly predictable events: the arrival of the excited and expectant [freshman] every autumn; the Department Christmas party with its traditional sketches by students mimicking the mannerisms and favorite jargon of members of staff; the reading week in the spring term when they took the second year to a residential conference centre in the Lake district; the examiners meetings in the summer term when, sitting round a long table heaped with marked scripts and extended essays, they calculated and classified the Finals results like gods dispensing rewards and punishments to mortals; and finally the [commencement] itself, processing to organ music in the Assembly hall, listening to the University Orator fulsomely summarize the achievements of honorary [graduates], shaking hands afterward with proud parents and their begowned children sipping fruit punch fruit punch under the marquee erected on the Round Lawn, after which all dispersed to a well-earned long vacation.  He missed the rhythm of the academic year as a peasant might miss differences between seasons if they were suddenly withdrawn; and he found he missed too the structure of the academic week, the full diary of teaching assignments, postgraduate supervisions, essay marking, committee meetings, interviews, and deadlines for this and that required report, tasks he used to grumble about but the completion of which, however trivial and ephemeral they were, gave a kind of low-level satisfaction, and ensured that one never, ever, had to confront the question: what shall I do with myself today?  In retirement, he confronted it every morning as soon as he woke” (28).

This passage seems eerily prescient as inch toward retirement myself. 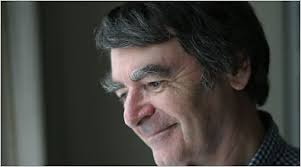 David Lodge has a couple of items, which gave me pause; however, I quickly adapted to his style.  Of course, the long sentences and extensive use of the English Major’s carefully protected and hoarded punctuation mark – the semi-colon.  But all in all, a pleasant read for anyone who has spent more than a few years in academia.  David Lodge’s novel, Deaf Sentence, holds a well-earned spot on my shelf of fiction set in academia.  5 stars.