Levels of Life by Julian Barnes

Julian Barnes won the 2011 Booker Prize for his splendid novel, The Sense of an Ending, which explores the memories a group of friends has upon the death of one of their number.  Barnes returns to that theme in Levels of Life.  In this essay, he explores the idea of two people coming together for the first time, and then how they are torn apart.  But the story is much more complicated than that,

The essay is divided into three parts – “The Sin of Height,” “On the Level,” and “The Loss of Depth.”  These three parts revolve around historical figures who came together in unique ways.  The first involves a photographer and the renowned 19th century actor, Sara Bernhardt.  Barnes provides an outline of the history of ballooning and early photography.  Colonel Fred Burnaby is an aeronautical enthusiast, and when he meets up with Sara Bernhardt, the world is changed.  Part Two continues with Burnaby and Bernhardt and the sudden collapse of their affair.  In Part Three, Barnes begins a lengthy meditation on life, love, and loss following the death of his wife, Pat Kavanagh, in 2008.

Barnes’ prose is vivid and heart rending.  He writes in part two, “We live on a flat, on the level, and yet – and so -- we aspire.  Groundlings, we can sometimes reach as far as the gods.  Some soar with art, others with religion; most with love.  But when we soar, we can also crash.  There are few soft landings.  We may find ourselves bouncing across the ground with leg-fracturing force, dragged towards some foreign railway line.  Every love story is a potential grief story.  If not at first, then later.  If not for one, then for the other.  Sometimes, for both” (39).  His language is quite poetic.


In part three, he explores the meaning of loss.  Following condolences by a friend, Barnes writes, “The same friend, four years later, said, ‘I resent the fact that she’s become part of the past.’  If this isn’t yet true for me, the grammar, like everything else, has begun the shift: she exists not really in the present, not wholly in the past, but in some intermediate tense, the past-present.  Perhaps this is why I relish hearing even the slightest new thing about her: a previously unreported memory, a piece of advice she gave years ago, a flashback in ordinary animation.  I take surrogate pleasure in her appearances in other people’s dreams – how she behaves and is dressed, what she eats, how close she is now to how she was then; also whether I am there with her.  Such fugitive moments excite me, because they briefly re-anchor her in the present, rescue her from the past-present, and delay a little longer that inevitable slippage into the past historic” (117). 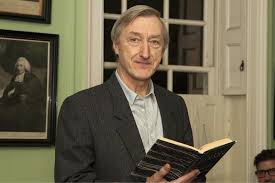 He provides an interesting quote from Dr. Samuel Johnson who, “well understood the ‘tormenting and harassing want’ of grief; and he warned against isolationism and withdrawal.  ‘An attempt to preserve life in a state of neutrality and indifference is unreasonable and vain.  If by excluding joy we could shut out grief, the scheme would deserve very serious attention.’  But it doesn’t.  Nor do extreme measures, like the attempt to ‘drag [the heart] by force into scenes of merriment’; or its opposite, the attempt ‘to soothe it into tranquility by making it acquainted with miseries more dreadful and afflictive.’  For Johnson, only work and time mitigate grief.  ‘Sorrow is a kind of rust of the soul, which every new idea contributes in its passage to scour away’” (118).

I found Julian Barnes essay, The Levels of Life comforting.  I know I will face loss, and I will return to this interesting essay as an excellent companion through dark times.  5 stars