So You Don't get Lost in the Neighborhood by Patrick Modiano

In his first novel since winning the Nobel Prize in 2014, Patrick Modiano has spun an absorbing tale of mystery and suspense.  He is a French novelist who also won the Austrian State Prize for European Literature in 2012 and the 2010 Prix Mondial Cino Del Duca from the Institute of France for lifetime achievement.  His other prestigious awards include the Prix Goncourt  The Street of Obscure Boutiques in 1978 and the 1972 Grand Prix du Roman de L’Académie for Ring Road.  His work has been translated into more than 30 languages.  Most of his novels had not been translated into English until he was awarded the Nobel Prize.


Jean Daragane is a novelist who is in a funk and living as a recluse in Paris.  One day he discovers he has lost his address book, and he receives a phone call from a stranger, who found the book in a train station.  His first thought is blackmail, but he agrees to meet the caller, Gilles Ottolini, who brings a woman friend, Chantel Grippay.  Jean retrieves the book and leaves.  The next day, Gilles calls again, and wants to talk about an entry in the address book – Guy Torstell.  Jean has no memory of who this man is or even why he is in his address book.  Gilles reveals Jean also used the name in his first novel, 30 years ago.  The mystery thickens when Jean receives a call from Chantell and reveals several apparently coincidental items, which connect Gilles and Jean.  The next day, Chantel calls Jean, and ask him to meet at her apartment.  Modiano writes, “She leant over to him, and her face was so close to his that he noticed a tiny scar on her left cheek.  Le Tremblay.  Chantel.  Square de Graisvaudan.  These words had traveled a long way.  An insect bite, , very slight to begin with, and it causes you an increasingly sharp pain, and very soon a feeling of being torn apart.  The present and the past merge together, and that seems quite natural because they were only separated by a cellophane partition.  An insect bite was all it took to pierce the cellophane.  He could not be sure of the year, but he was very young, in a room as small as this one with a girl called Chantel – a fairly common name at the time.  The husband of this Chantel, on Paul, and other friends of theirs had set off as they always did on Saturdays to gamble in the casinos on the outskirts of Paris: […] and they came back the following day with a bit of money.  He, Daragane, and this Chantel, spent the entire night together in this room in square du Graisvaudan until the others returned.  Paul, the husband, also used to go to race meetings.  A gambler.  With him it was not merely a matter of doubling up on your losses” (31-32). 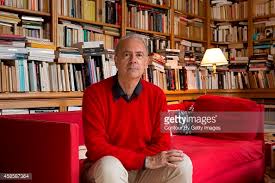 As Modiano expands on this peculiar web of coincidences, the suspense rises.  Chantel gives Jean copies of notes for an article about Tostel.  It is not apparent that she had permission to do so.  Later, Jean examines the copies, and notices a passage from his first novel, Summer Night.  Modiano reads from his novel, “In the Galeris de Beaujolais, there was indeed a bookshop behind whose window some art books were displayed.  He went in.  S dark-haired woman was sitting at her desk. //.  ‘I should like to talk to Monsieur Morihien.’ // Monsieur Morihien is away,’ She told him.  “But would you like to speak to Monsieur Torstel?’” (41).  The tenuous threads, which hold this story together, create a tale of mystery and suspense, which you can finish in a day.


The more clues Patrick Modiano supplies, the more mysterious the story becomes.  So You Don’t Get Lost in the Neighborhood is a good introduction to a writer for those interested in a good mystery mixed with fine literary fiction.  5 stars