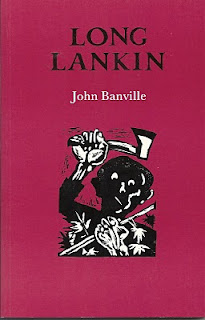 On my annual trip to Charleston and The Blue Bicycle Book Shop, I stumbled on this slim paperback of John Banville’s first book. Although changed from the 1970 original – one story and a novella were deleted, and one story added – this collection has an atmospheric air about it that reminds me of The Turn of the Screw by Henry James.

Each of these stories has wonderful prose wrapped about a mysterious person, perhaps a ghost, perhaps a murderer, perhaps a fleeting shadow in the woods. Most of the characters have anxieties, passions, and secrets. Banville deftly builds to the climax of each story.

Curiously -- there is no title story – but they all have a psychological probing into the characters. In “Summer Voices,” Banville’s prose elucidates the characters of a brother and a sister who have escaped from their aunt’s daily prayer session for a swim.

“The boy did not move. Sunlight fell through the tiny window above the stove. The radiance of the summer afternoon wove shadows about him. Beyond the window a dead tree stood like a crazy old naked man, a blackbird hopping among the twisted branches. The boy stood up and went into what had once been the farmyard – the barn and the sties had long since crumbled. After the dimness of the kitchen the light burned his eyes. He moved across to stand under the elm tree and listen to the leaves. Light glinted gold through the branches. He stood motionless, his arms hanging at his sides, listening, and slowly from the far fields, the strange cry floated to his ears, a needle of sound that pierced the stillness. He held his breath. The voice hung poised a moment in the upper airs, a single liquid note then slowly faded back into the fields, and died away, leaving the silence deeper than before.” (65)

I only wish I had discovered this writer 40 years ago! I am making my way through his 15 published works, and it is a journey of sublime delight. (5 stars)