I own a couple of dozen books about Buddhism. I enjoy reading about the four noble truths [Life means suffering; the origin of suffering is attachment; the cessation of suffering is attainable; and the path to the cessation of suffering], the teachings of Buddha and Zen Masters, and the many riddles used in instruction; however, I have not read anything by Suzuki. But when I read that this book by him was challenged at the Plymouth-Canton school system in Canton, Michigan in 1987, I decided to purchase it. The book-banners explained their decision by stating, "this book details the teachings of the religion of Buddhism in such a way that the reader could very likely embrace its teachings and choose this as his religion." I agree it is a thorough and well-written survey of the history and philosophy of Buddhism, but I completely disagree that this – or any book – could turn someone away from sincere and deeply held beliefs. If this book turned anyone any which way, it was because the reader had some doubts about those beliefs.

Zen Buddhism has not convinced me to embrace Buddhism as a life style. Still, many of the ideas are appealing. Introspection, respect for all sentient life, non-violence, and moderation – among other ideas – are things practitioners of any religion can easily embrace.

According to the author’s note, Suzuki, who lived from 1869 to 1966, was born and educated in Japan. He lectured extensively throughout the world and taught at Columbia University. He influenced many of the great thinkers of the 20th century, including C. G. Jung, Aldous Huxley, and the Trappist Monk, Thomas Merton.” 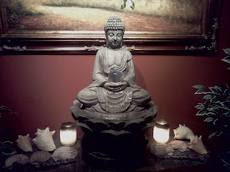 Suzuki begins with a discussion of the “sense of Zen,” and notes that “Hebraic and Greek traditions are profoundly dualistic in spirit. That is, they divide reality into two parts and set one part off against the other. The Hebrew tradition divides God and creature, the Law and erring members, spirit and flesh. The Greek, on the other hand, divides reality along intellectual lines,” … [making] “reason the highest and most valued function” (x). The bedrock of Buddhism, however, lay in the idea of “favoring intuition over reason” (x).

Suzuki then outlines a detailed history of Buddhism from its origins in India through China, and to Japan. He then focuses on several varieties of Zen whose adherents practice meditation in an attempt to develop “a new viewpoint on life and things generally” (98). According to Suzuki, “Zen is a matter of character and not of the intellect” (114). Furthermore, he writes, requires something inwardly propelling, energizing, and capable of doing work” (111). I see this “inward force” as faith.

Zen, on the other hand, “gives life to the intellect … by giving one a new point of view on things, a new way of approaching the truth and beauty of life and the world, by discovering a new source of energy in the inmost recesses of consciousness, and by bestowing on one a feeling of completeness and sufficiency” (132).

Suzuki then gives a guide to practical instruction in Zen, Zen and the unconscious, lessons in the koans, or riddles, used in instruction, the role of nature, a survey of existentialism, pragmatism, and Zen, and finally, notes on painting, poetry, and the tea ceremony. 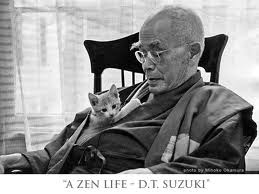 I highly recommend this book to any reader who has ever had any curiosity about Zen Buddhism. I tried, but failed to find anything that cannot fit within the confines of most organized religions. The only drawbacks are the Chinese and Japanese names, which can be confusing. I am moving this book to my desert island shelf. 5 stars

Hi, just read this one. I like some things about it but dislike the persistent craziness. You're right about Buddhism as a whole though - its ideas are often very simple and make a lot of sense. You can read what I think about Suzuki's book here:
http://mrpropter.blogspot.com/2012/08/over-bridge.html