Mortality, Christopher Hitchens’s essays on his slow walk to death, all have an air of seriousness, of course, but a vein of humor runs through them like a stream of cool water. I read this 104-page gem in a single sitting. The book includes a forward by Graydon Carter, the editor of Vanity Fair, for whom Hitchens wrote for many years, and an Afterword by his wife, Carol Blue.

According to her, “Hitch” – as his friends and readers affectionately knew him – wrote up until the end. In fact, the main point of the book is about the importance of writing. His greatest fear seemed to be the loss of this ability. During the final stages, speech became almost impossible, but he kept writing away. The last chapter consists of fragments, which “seem to trail off, but in fact were written on his computer in bursts of energy and enthusiasm as he sat in the hospital using his food tray for a desk” (103) as Carol Blue says.

Hitch gave some advice to writing students, which I have shared with my writing classes. He would begin, “by saying that anybody who could talk could also write. Having cheered them up with this easy-to-grasp ladder, I then replaced it with a huge and loathsome snake: ‘How many people in the class, would you say, can talk? I mean really talk?’ This had its duly woeful effect.” He then added this advice: “Avoid stock expressions (like the plague, as William Safire used to say) and repetitions. … So, this above all: Find your own voice” (50).

He wrote on an incredibly wide variety of topics, but I did not always agree with him, particularly in regard to his support of the Iraq War; however, I always loved his prose, his way with words, his humor, and his evident love of the English language. Mortality is a sad good bye to and from Hitch. 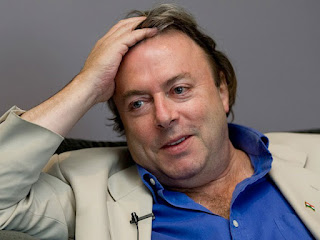 Reading this meditation upon his impending death, inspired me to dig into the recently published mammoth, Arguably: Essays by Christopher Hitchens. At nearly a thousand pages, it contains well over a hundred of his essays. I would rarely sit down and begin reading something like this from cover to cover, so I devised a plan -- an homage -- to Hitch. Starting on Sunday, September 16, 2012, I read one essay every night before bed. It will take more than three months, but that will be my own meditation on the loss of one of the great writers and orators of the 20th and 21st centuries. 5 stars