Through the years, the name Paul Auster would occasionally pop up in interviews, reviews, blogs, and even a half-hearted suggestion from a friend. But none of these sparked any interest in this prolific author. He has written 16 novels, 4 screenplays, 6 works of non-fiction, a volume of poetry, 3 illustrated books, and he has edited 3 anthologies. When I received an advance reader’s edition of his latest work – a memoir, Winter Journal -- from Henry Holt through the early reader’s club of www.LibraryThing.com, I decided it was time to find out what Paul Auster was all about.

Winter Journal appears 30 years after his critically acclaimed memoir, The Invention of Solitude, and, as the cover notes say, “Auster gives us a second unconventional memoir.”

The cover notes further state, Auster writes a “history of his body and its sensations – both pleasurable and painful.” Unconventional is a bit of an understatement. Auster wrote Winter Journal in the second person. Normally, I do not read second person novels. Ever since Jay McInerny’s, Bright Lights, Big City, I have resisted the temptation to read second person works. Auster’s memoir, however, has given me pause – a great, big, eye-opening pause. His narrative is engaging, and drew me almost from the first page, once I got over my “you/your phobia.”

Early on, when Auster examines his young body, he writes,

“…you ask your mother the question all children ask their parents, the standard question about where babies come from, meaning where did you come from, and by what mysterious process did you enter the world as a human being? Your mother’s answer is so abstract, so evasive, so metaphorical that it leaves you utterly confounded. She says: The father plants a seed in the mother, and little by little the baby begins to grow. At this point in your life, the only seeds you are familiar with are the ones that produce flowers and vegetables, the ones that farmers scatter over large fields at planting time to start a new round of crops for harvest in the fall. You instantly see an image in your head: your father dressed as a farmer, a cartoon version of a farmer in blue overalls with a straw hat on his head, and he is walking along with a jaunty, insouciant stride out in some rural nowhere, on his way to plant the seed.” (36).

My mother told me an almost identical story, except that the seed was “planted” beneath the mother’s heart. I had no idea back then my mother was so poetic! 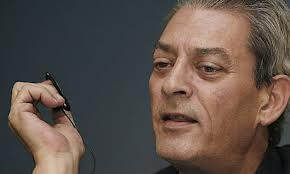 Auster’s Winter Journal becomes a new connection to a favorite author. I already have a copy of The Invention of Solitude. I might even go back and take another look at Jay McInerney’s novel. 5 stars