Luka and the Fire of Life by Salman Rushdie

Salman Rushdie has a reputation for prose that tends to be dense to the point of un-readability. I believe this view has developed solely from The Satanic Verses, which is, admittedly, a difficult read. But lately, Rushdie has published a number of books that are not only eminently readable, but interesting and thoroughly entertaining. His 2010 novel, Luka and the Fire of Life proves this point.

Luka’s father, Rashid, has an unparalleled talent for telling stories. He has created whole worlds full of interesting characters, places, and ideas, which become real for Luca, when he actually travels to “The World of Magic.” One day, Rashid falls into a deep sleep, which puzzles the doctors. Luka, concerned for his father, takes an errant step, and slips into the world his father created. The wraith, Nobodaddy, slowly absorbs Rashid’s life forces, and, should he absorb all of them, he will die. Luka decides if his father dies, his stories, and the world he created, will die with him. The young boy embarks on a classic hero’s journey to steal the fire of life, restore his father to health, and save the World of Magic.

Rushdie has bathed this novel in the art of storytelling. In fact, the entire story is about stories and the lessons they teach us. Luka also fits nicely into Joseph Campbell’s keys to his theory of myth. Luka reluctantly answers the call to adventure, he has helpers and supernatural assistance, he must cross the threshold of The River of Time, he must complete the last leg of his journey alone, and he returns to his home. But will he make it in time to save his father?

Another interesting and fun aspect of this work includes the numerous embedded cultural references that seem way out of time and place in the World of Magic. For example, while looking at “The River of Time,” Luka sees,

“Running along the bank was a white rabbit wearing a waistcoat and looking worriedly at a clock. Appearing and disappearing at various points on both banks was a dark blue British police telephone booth, out of which a perplexed-looking man holding a screw driver would periodically emerge. A group of dwarf bandits could be seen disappearing into a hole in the sky. ‘Time travelers,’ said, Nobodaddy in a voice of gentle disgust. ‘They’re everywhere these days’” (60-61). Alice in Wonderland, Doctor Who, and Monty Python all in one breath. This story can be shared by the whole family. 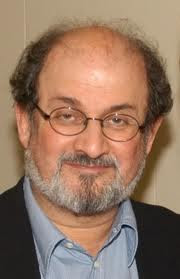 In fact this novel is about storytelling, the importance of myth, and imagination. Rushdie does it with style, grace, and a prose so spectacular, he never ceases to amaze me. I have read eight of his eleven novels, and I have the other three which I am eagerly waiting to devour. If you have never read Rushdie, Luka and the Fire of Life is a grand place to start. 5 stars.