All That Is by James Salter 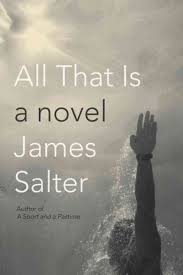 I first encountered James Salter in an October 28, 1990 profile in The New York Times Magazine.  The article quoted Salter, “Somewhere the ancient clerks, amid stacks of faint interest to them, are sorting literary reputations.  The work goes on endlessly and without haste.  There are names passed over and names revered, names of heroes and of those long thought to be, names of every sort and level of importance.”  The Times then asked, “Where will the tireless clerks file the name James Salter?”

With such an intriguing introduction, how could I not investigate farther?  I started with Salter’s 1988 PEN/Faulkner Award-winning collection, Dusk: And Other Stories.  I was immediately captivated and added several more of his books to my shelves.  The PEN/Faulkner Award is America’s most prestigious literary prize.  As numerous critics have said, Salter is a “writer’s writer.”  Noted critic, James Walcott dubbed him our “most underrated writer.  I could not agree more.

The Times reported Salter was born in New York City and attended the Horace Mann School in Riverdale.  His father had graduated first in his class at West Point in 1918, and Salter became a cadet.  Upon graduation, he joined the Army Air Corps.  He served in Korea, where he shot down one MIG and damaged another.  His experiences as a fighter pilot became the inspiration for one of his early stories, “A Single Daring Act.”  After achieving the rank of major, he abruptly resigned to devote his full efforts to writing.  In 1956, he had his first novel published, The Hunter.  He also spent some time as a screenwriter.  His writing credits include the cult film “Downhill Racer.”

His latest work, All That Is, carries this reputation forward.  This is his first novel since 1979.  Poetic and literary, Salter chronicles the life of Philip Bowman.  The novel opens with Midshipman Bowman on a carrier under attack by the Japanese in the days before the invasion of Okinawa.  After the war, he returns to America and becomes a book editor. 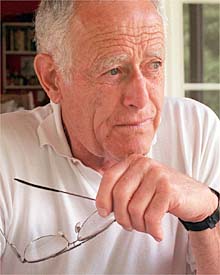 The novel has an intricate web of characters who come in and out of Bowman’s life.  Despite his frightening experiences in the Pacific, Bowman seems obsessed with water and conquering lingering fears.  Swimming figures in a number of his relationships.  He attracts, beautiful, wealthy women, but he seems unable to hold onto them – they slip through his fingers line a handful of water.

In an epigram in All That Is, James Salter writes, “There comes a time when you realize that everything is a dream, and only those things preserved in writing have any possibility of being real.”  A writer’s writer indeed!  No more quotes, I want you to experience this outstanding writer entirely on your own.  I believe his reputation will endure.