I share a birthday with Orhan Pamuk born in Istanbul in 1952.  He grew up in a large family in a wealthy, westernized district of Turkey.  According to his official website, until the age of 22 he dreamed of becoming an artist.  He graduated from Robert College in Istanbul, and then studied architecture at Istanbul Technical but abandoned this course for a degree in journalism from Istanbul University.  He never worked as a journalist.  At the age of 23 Pamuk decided to become a novelist and retreated into his flat and began to write.  Orhan’s books have been translated into 46 languages, and he has won numerous literary awards in Turkey and Europe.  He was awarded the 2006 Nobel Prize for Literature, becoming the second youngest person to receive the award in its history.  Apart from three years teaching in New York, Orhan Pamuk has spent his entire life in the same streets and district of Istanbul.  He now lives in the building where he was raised.  Pamuk has been writing novels for 30 years and never had any other job except writing.

I always read at least one work by each year’s Nobel Laureate.  This habit has led me to discover many great writers—Saramago, Kurtesz, White, and a few others.  Snow by Orhan Pamuk is one complex novel – but don’t let that stop you!  Pamuk has told an intricate tale with lots of interesting characters.  The mystery narrator of the novel, reveals himself at the end, and that is a big surprise.  The story is absorbing, and the history and politics provide the reader with lots the twists and turns.

At first, I thought I might not get through Snow, but something kept pulling me along.  I began to build up speed, and, about a third of the way through, I was captivated.  I could barely put it down over the last 150 pages.  A description of another of his novels intrigued me, and like the multiplication of cats, one good book leads to a full shelf. 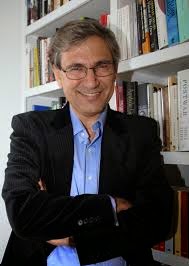 For me, the beginning of a novel holds great importance.  The opening lines can bore, intrigue, cause laughter, or tears.  Pamuk intrigues when he writes of Ka an exiled poet, who returns to his home village: “The silence of snow, thought the man sitting just behind the bus driver.  If this were the beginning of a poem, he would have called the thing he felt inside him the silence of the snow.  //  He’d boarded the bus from Erzurum to Kars with only seconds to spare.  He’d just come into the station on a bus from Istanbul – a snowy, stormy, two-day journey – and was rushing up and down the dirty wet corridors with his bag in tow, looking for his connection, when someone told him the bus for Kars was leaving immediately” (3).  Pamuk mixes quiet introspection with the rush and hustle of the outside world.

I did notice a couple of missing pieces of the cultural puzzle which would have helped me appreciate the story more.  But the prose of Orhan Pamuk’s Snow is reward enough.  4½ stars.