The Impossible Lives of Greta Wells by Andrew Sean Greer

Andrew Sean Greer was born in November 1970, in Washington, D.C., the son of two scientists.  He studied writing at Brown University, and after years in New York working as a chauffeur, television extra and unsuccessful writer, he moved to Missoula, Montana, where he received a master of fine arts degree from the University of Montana.  He soon moved to Seattle, where he wrote for Nintendo and taught community college, then to San Francisco where he began to publish in magazines such as Esquire, The Paris Review, and The New Yorker before releasing a collection of his stories, How It Was for Me.  The New York Times Book Review praised it, commenting that "Greer's descriptive talents are immense."  His first novel, The Path of Minor Planets was a critical success.  I first encountered Greer on the publication of his second novel, The Confessions of Max Tivoli.  His powers of description are a wonder to behold.  The Impossible Lives of Greta Wells is his fourth novel and fifth book.

Greta Wells Lives in New York City in 1985.  In the late fall of that year, she suffers a mental breakdown, and he physician husband recommends Dr. Cerletti, who administers a series of 25 electro convulsive therapy procedures.  When she awakens from each session, she is still in her room, but the date has changed from 1985 to 1918, and after the next treatment from 1918 to 1941, then back to 1985. Although Greta refers to herself as a “time-traveler,” I think this is misleading.  Since each of the three time periods she visits has the same characters, relationships, and locations, something else must be afoot.  Greer grew up in a scientifically inclined family, so perhaps The Impossible Lives of Greta Wells is an attempt to demonstrate the relatively new theory of the “multi-verse” construct of the universe.

As I began the novel, interest and curiosity quickly took over.  Since the novel Max Tivoli is the story of a man born old, who tumbles back into his childhood, I prepared myself for a wild ride.  The next chapter perplexed me however.  The voice changed and the prose seemed formulaic.  But I plowed on, and gradually accustomed myself to Greer’s style in his latest novel.  I am glad I did.

The novel grew on me, and became an interesting exploration of mistakes made and attempts to remedy those errors and alter the other two Greta’s lives into something which fir more closely their dreams. 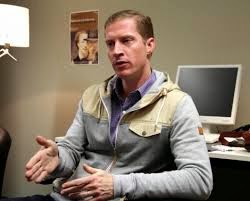 Greer still has an impressive talent for description.  He writes, “I lay there for a long time trying to make sense of what I saw.  Sunlight and shadow.  Striped satin and lace.  A piece of fabric hanging over me, dappled by the sun and leaves, billowing slightly from the open window.  The sound of a steam whistle, and the clatter of hooves.  Striped satin and lace; it was quite beautiful, moving in slow waves above me, just as my mind had been moving in waves as I awoke: a canopy bed.  My eyes moved down to take in the rest of the room, which was lit with the same watery refracted light.  My breath began to quicken.  Because the bed I had fallen asleep in had no posters, no fabric.  And the room I saw before me was not my room (27-28).

Greta flits from one period to another trying to fix things without revealing exactly who she is.  Only her best friend, her Aunt Ruth, knew the truth and told 1985 Greta the plans and activities of the 1918 and the 1941 Greta.  Suddenly, I could not put it down!  And I bet you can’t either!  5 Stars