Occasionally, a second or third read of an author I admire comes off as something of a disappointment. Norman Rush won the National Book Award in 1991 for his first novel, Mating.  This novel explores the idea and the practice of love, and is set in Botswana.  It tells the story of a young woman working on a thesis in anthropology.  She comes to a dead end in her research, but then falls in love with a mysterious man who claims to have established a utopian society in a remote corner of the Kalahari Desert.  I found the novel – which I read at the urging of a close friend – to be exciting, and strangely disturbing, while revealing much about the nature of love.  Rush is a slow writer, so I lost track of his second novel, Mortals, but I grabbed his latest work, Subtle Bodies.

At first, I felt a slight disinterest in the characters – five friends from their years at NYU – four of whom reassemble for a funeral to memorialize their “leader.”  However, something else about the characters, what they thought of each other and themselves and what role each played in the friendship, captured my attention.

Ned receives the news of Douglas’ death while deeply immersed in organizing the antiwar marches trying to prevent the invasion of Iraq after 9/11.  He rushes off to the funeral while he and his wife, Nina, are trying to conceive.  Nina chases after him to take advantage of a propitious moment in their endeavor.  Elliot is a lawyer and a stockbroker who has advised Douglas and his wife, Iva.  Gruen and Joris round out the quintet.

Iva tries to dictate every detail of the memorial service, and, as to be expected, the four friends recoil in horror.  Joris wants to leave.  Rush writes, “Ned was having a particularly strong reaction to Joris leaving.  Partly it was selfish because he hadn’t finished the task of putting together what they had all been, with what they were now.  And the question was still there of whether their true interior selves – the subtle bodies inside – were still there and functioning despite what age and accident and force of circumstance may have done to hurt them.  He meant something like that  … that when they had become friends it had been a friendship established between subtle bodies, by which he meant the ingredients of what they were to be …” (198). 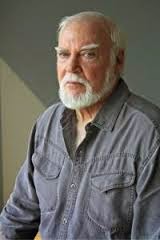 Nina is a feisty young woman, who adds a lot of spice and color to the story.  She watches a woman reading, and, as Rush explains, “[Nina] always wanted to know what people were reading.  I can’t help it, she thought” (6).  “[S]he couldn’t interrupt this person when she was reading.  Because reading was sacred” (7).  A person after my own heart!

Alert: this is an adult novel with a couple of explicit scenes when Ned and Nina work on their “project.”  Nonetheless, it is a gripping story, and as I learned more and more about the characters, I became more and more interested in them.  For the slow start, however, I must give Subtle Bodies by Norman Rush 4-1/2 Stars.