I once drove about six hours from Philadelphia to Boston to hear Margaret Atwood read from her then latest novel, Cat’s Eye.  Set in Toronto, the book was her first novel after A Handmaid’s Tale.  Atwood is a writer I collect assiduously, because I have never read anything she has written that I have not thoroughly enjoyed.  Stone Mattress: Nine Tales is her latest work.  The peculiar title intrigued me, and I want ted to read simply to find out about a stone mattress.  This title story did that and so much more.

All nine stories focus on relationships between men and women.  The first three were lots of fun, since they detail the story of Gavin, a mediocre poet, who did have some early success, and three of his partners.  In the first, “Alphinland” is narrated by Constance, Gavin’s first.  She is a writer, who has penned a popular series of fantasy tales set in Alphinland.  Gavin disdained her work when they were married, but the popularity of the stories has provided Constance with a comfortable lifestyle.  She has put all her friends, family, and Gavin into the stories with only the thinnest of disguises.  Aging rapidly, she wanders around her apartment listening for the voice of her recently departed mate, Ewan.  The voice helps her remember things, such as “take a flashlight” when she walks through a storm to buy some food in a town with no power.  Atwood writes, “What they didn’t understand was that – increasingly – she did take it seriously.  Alphinland was hers alone.  It was her refuge, it was her stronghold; it was where she could go when things with Gavin weren’t working out.  She could walk in spirit through the invisible portal and wander through all the darkling forests and over the shimmering fields, making alliances and defeating enemies, and no one else could come in unless she said they could because there was a five-dimensional spell guarding the entryway” (22).

The second story, “Revenant,” describes Gavin’s last wife, Reynolds.  She tries to keep up Gavin’s reputation, but he is a crusty, mean old man, who does not want the attention.  Reynolds sets up an interview with a graduate student, believing she was interested in Gavin’s poetry.  To his dismay, Naveena’s thesis involves the Alphinland stories, and she wants to confirm the alter ego of Gavin.  Gavin discovers Reynolds has sold his papers to a university. 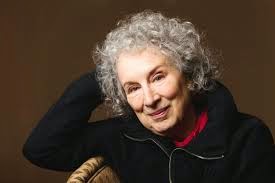 The third story involves Jorrie a former partner of Gavin, who reads his obituary in the paper.  She decided to attend the ceremony, and discovers all three women are present.  Lots of awkward fun there!

The last two stories, “Stone Mattress” and “Torching the Dusties,” round out the collection and end this marvelous book with two exciting stories.  Sorry, no spoiler alerts!  Read the collection and find out exactly what a “stone mattress” is, and then end up with a thrill ride nearly reminiscent of her great novel, A Handmaid’s Tale.”

Stone Mattress: Nine Tales will make many readers fans of Margaret Atwood.  The visit to The Harvard Bookstore Café ended with a half dozen of her novels in my collection signed.  And it was worth every mile I drove.  5 stars