The Assassination of Margaret Thatcher by Hilary Mantel

In order to feed my craving for more of Hilary Mantel, author of two Booker Prize winning novels of the court of Henry VIII, I picked up a copy of the recently published collection of stories, The Assassination of Margaret Thatcher.  I have about another year until the third and final volume in the trilogy of Henry, Thomas Cromwell, and the rest of the Tudors of what I consider one of the most interesting dynasties in history.  So these ten stories will have to tide me over until then.

Mantel exercises all of her literary power in this collection.  Only one story – about a 17 year-old-girl with anorexia – disturbed me right out of my enjoyment.  The other nine however, are serious, astute, and pleasurable reads.

The first item, “Sorry to Disturb,” tells a tale of a husband, who never speaks to his wife.  She is affected by an oppressive culture, and her husband’s silence only adds to her misery.  The next, “Comma” is a rather peculiar story of two children – both from average middle class families.  Kitty is precocious and Mary developmentally challenged.  Mary transfers to another school, and and loses touch with Kitty.  They bump into each other on the street years later.

In “The Long QT,” Jody catches her husband kissing Lorraine, and a surprising result occurs.  The next, “Winter Break,” involves a couple on a pre-paid vacation, who jump in the first available taxi, and are off for a bumpy ride.  Bettina works as receptionist in a medical building.  She tries to befriend a peculiar, lonely woman, but that plan backfires in “Harley Street.”  In “Offenses against the Person,” a teen discovers her father’s affair with a co-worker.

One of the most interesting stories is “How Shall I Know You?”  The narrator is on a book tour, and must put up with grungy hotels, terrible food, and an unending series of dull and clichéd questions.  I sense a bit of biography her from Mantel.  “Terminus is a creepy story about a woman who sees her dead relatives on a train. 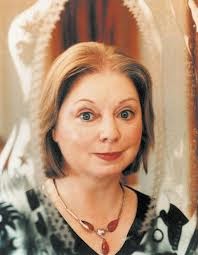 That brings us to the title story, “The Assassination of Margaret Thatcher: August 6th 1983.”  A woman expects a boiler repairman for her home near No. 10 Downing Street.  When the bell rings, she admits him.  He turns out to be an assassin, who takes over her house.  A rather thrilling story to end the collection.


I always enjoy English writers for what they add to my vocabulary.  Hilary Mantel’s collection of short stories, The Assassination of Margaret Thatcher is intelligent, interesting, and a worthy read.  I don’t “mind the gap” in the Tudor Trilogy as much as I might with these great stories.  5 stars.